Upcoming BlackBerry 10 roadmap leaked but 2013 could be too late

We’ve been bringing readers plenty of news lately regarding RIM’s BlackBerry woes and about the upcoming BlackBerry 10 OS and products relating to it. The news for RIM has been grim for some time now and recently we told how BlackBerry 10 has now been delayed until 2013 and wondered if this might be the final nail in the coffin. However we now have details of a leaked BlackBerry roadmap for 2013 so at least we have more information on what could be on the way.

We recently gave news of the BlackBerry L-Series and N-Series, previously dubbed London and Nevada, as these looked like the first handsets that will be launched running BlackBerry 10 OS. After hearing the news that they would be delayed until 2013 we then also told how RIM had refuted rumors that it would partner with Google Android to produce Android smartphones, seemingly another opportunity for recovery missed.

It seems that RIM is still ploughing on with the ‘all the eggs in one basket’ strategy that relies so much on the success of BlackBerry 10 OS and subsequent products. Although we feel this could be too little too late, we shall continue to give readers BlackBerry news as we hear it as we know there are still plenty of BlackBerry enthusiasts amongst our readers. The leaked roadmap comes to our attention from BlackBerry OS and details timeframes for not only products we’ve already heard about but more besides. Of course none of this is confirmed yet but it does give us an interesting taster.

As you’d expect from the leaked roadmap we’re also informed that BlackBerry 10 OS will launch in Europe first with North America to follow between 3 and 4 weeks later, both in Q1. We’re not sure how reliable this is but the European launch could happen in the first week of January while it should reach North America in the first week of February. We’re told that the new OS will launch in Europe first because feeling towards the BlackBerry platform there is more positive. As far as the Nashvile and Naples devices are concerned we have no firm news yet on what these devices are. As they both start with ‘N’ they could be more in the N-Series of phones but they could just as easily be new tablet devices.

The roadmap certainly gives an intriguing look into what the next few months have in store for BlackBerry fans. Do you think BlackBerry 10 and devices coming in 2013 are too late? Maybe you think many of us are being unnecessarily gloomy looking at BlackBerry’s outlook? Send your comments to let us know. 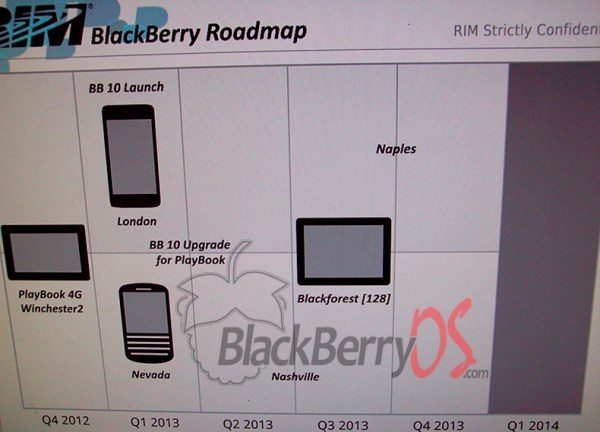