The Samsung Galaxy Note has been quite a hit for the company since it was released last year, as consumers like the smartphone tablet crossover that offers the best of both worlds. The nearest thing to the Galaxy Note is arguably the LG Optimus Vu, and today we have news of a Verizon bound version of the handset spied ahead of its release.

Last month we told you that the Verizon LG Optimus Vu had passed through FCC certification, and now it seems the availability of the handset is closer as the Android Police has some images of the device with Verizon marketing. Below we have an image that shows the LG Optimus Vu alongside the Samsung Galaxy S3.

It is thought that the Verizon version of the Optimus Vu will come with Android 4.0.4 Ice Cream Sandwich straight out of the box, but considering how long the operating system has been available it would have been nice if it shipped with Android 4.1 Jelly Bean.

LG has been slow upgrading handsets outside of Korea to Ice Cream Sandwich, but the device has recently been treated to it in the country, but it was of the ‘Value Pack’ variety. It is not known if any of the hardware specifications will change for the Verizon version of the Optimus Vu, and if not will mean the handset will be powered by a dual core Snapdragon S3 processor clocked at 1.5GHz with an Adreno 220 GPU (MSM8660).

The handset features a 5-inch IPS LCD display, 1GB of RAM, an eight megapixel camera on the back with a 1.3 megapixel shooter on the front, and there is 32GB of on board storage available. The source hasn’t denied or confirmed if there will be any changes made to the Verizon version, but from the images it can be seen that the device is compatible with the carriers 4G LTE network.

There is no news on a release date but as the device has already passed through FCC it shouldn’t be too much longer before Big Red is offering the LG Optimus Vu to its subscribers. Do you like the look of the LG Optimus Vu? 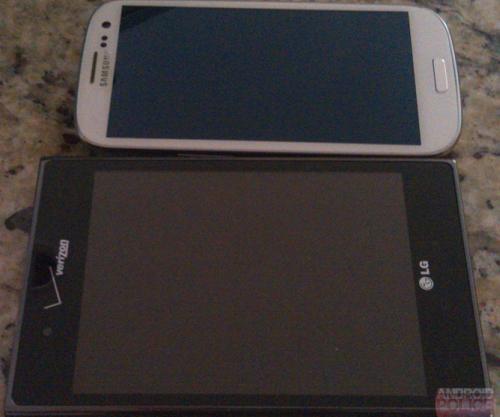