For those that love the benefits of an unlocked bootloader, you just might like to know that the members of the CyanogenMod team have now released the latest version of CM9 that is suitable for most Samsung Galaxy S3 models available in the United States other than the Big Red Galaxy S3.

An article over on Android Authority by way of Android Community, says that Verizon at first tried to put the blame at Sammy’s door, which apparently caused old Sammy to deliver a Samsung Galaxy S3 Developer Edition, that works on the Big Red, and has an unlocked bootloader.

However the main downside with this is that those that wish to have that handset have to shell out the full retail price of 600-bucks due to Verizon refusing to subsidise the device.

As such, whilst other Samsung Galaxy S3 owners can install CyanogenMod 9, Verizon Galaxy S3 owners will be forced to play along with Sammy’s stock ROM, and as such will be at the mercy of both Verizon and Samsung when it comes to future updates.

One should make mention though that the CM9 ROMs for SGS3 models on AT&T, T-Mobile and Sprint are not stable as they are still in RC1; however they should become more stable quite soon, and then the CyanogenMod team will move onto CM10.

The guys do say though that there still might be a little hope for the Verizon Galaxy S3 with CM9 support, but that will rely on developers working out how to get around the locked bootloader first. 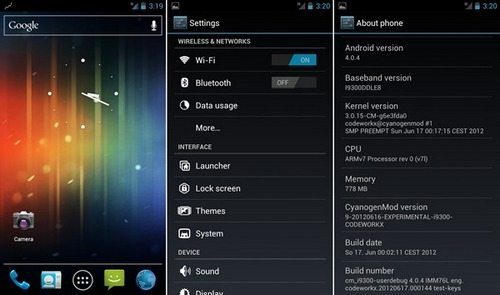