A few years ago none of us could have imagined the role that smartphones and the apps that run on them would have in our day-to-day lives. We often bring news about entertaining or useful apps but every now and then one comes along that not only can enhance life but also change life significantly. Today we want to tell you about the free Georgie Android app, which can help blind smartphone users.

Imagine how much daily use we get out of our smartphones and then try to imagine using those phones in the same way without the benefit of sight. The difficulties involved are such that one visually impaired man came up with the idea of an app that would help blind smartphone users and make those phones into a really valuable resource. The app is called Georgie and was developed by director and founder of Screenreader, Roger Wilson-Hinds as reported by Mashable.

The app enables blind users to accomplish daily activities such as catching a bus or reading printed text. Sight and Sound Technology now sells an Android phones pre-loaded with Georgie in the UK and are working on extending that to the U.S. Alternatively people who already own an Android phone can download the Georgie app from Google Play here. It’s a free app and suitable for devices running Android 2.1 or later. Navigating the phone is done through fingers and gestures as usual but the difference with Georgie is that the user holds the key down to hear a beep and then the phone reads out that function aloud through the use of voice control software.

Extra apps for more functions are also available to purchase and download, examples being a lifestyle app pack or travel app. You will need to call a Sight and Sound number to provision the app, as there is also a help desk and support available. You can see all the details about this at the Google Play link above and there’s also a video to view that tells you all about Georgie below this story. We think this is an amazing app and a great example of how smartphones and apps can improve our lives. We’d like to hear your thoughts on the Georgie app so let us have your comments. 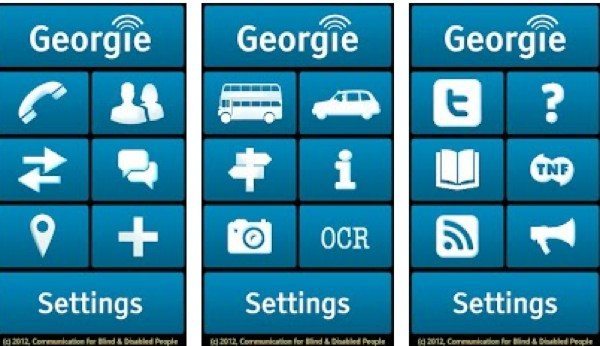