For those Android faithful out there that use the Google Play Music app, you might like to know that the application has new received an update to version 4.3.606, which is now available to download, and although the overall look remains the same, the update comes add a few new features.

The guys over at Engadget have taken the latest version of Google Play Music for a short spin, and say that almost every screen has a slight change, such as the recently played screen now shows bigger album art, and apparently the action bar has had an adjustment with different transport controls.

So what’s new in version 4.3.606 of Google Play Music? Well apart from those new large album art in recent, and the new UI for navigation and action bar, there is a Now Playing queue, which allows for queuing and reordering of current playing music, whilst the Now Playing widget has album art and thumbs up support, playlist art is now made from album art songs in the playlist, and the app is now apparently better, stronger, and faster.

Other than those new features, the Google Play Music app now has a direct link to the Nexus Q control app, as long as you have one and can run it of course.

Of course the Google Play Music app still enables Android users to purchase music from Google Play, and add up to 20,000 more songs from your own music collection on your PC for free, and share a free full play of the songs you buy from Google Play with your mates on Google+.

So if you haven’t yet downloaded the Google Play Music app to your Android device, you can grab the updated app for free by hitting up Google Play, although it is only for those in the USA. 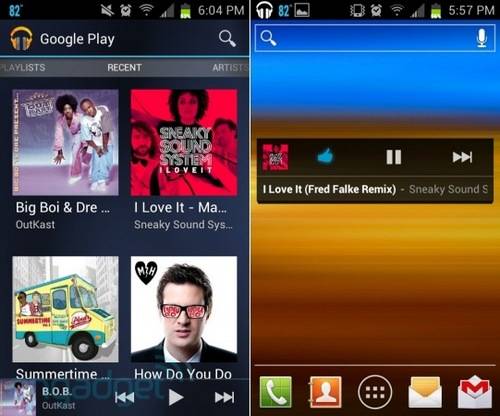