Many of you will have already heard of Mozilla’s ‘Boot to Gekko’ mobile initiative and that it was recently announced that it would now be referred to as Firefox OS. We recently told how the first mobile devices to launch using Firefox OS would arrive next year and in further news on the new operating system today we can tell you that some initial screenshots have now come to light.

The upcoming new OS has many people excited, including us, because of the thought of a new contender against the dominant Google Android and Apple iOS operating systems and we recently told how the first Firefox OS phones are likely to be made by Chinese vendors ZTE and TCL. Mozilla has gained support for its new initiative from major telecoms and although the first Firefox OS devices are not likely to be high-end devices, the interest in them is expected to be huge especially considering the popularity of the Firefox browser and its larger user base.

The initial screenshots of Firefox OS show the user interface and some system apps as reported by iDownload Blog. They give us a first look at Firefox OS and you can see those images at the link above and we’ve also shown you images of the lockscreen and the home page below this story. Other images show contact cards, mail and the messaging app, camera and gallery apps and more and there are definitely tinges of both the iOS and Android operating systems. The strength of the Firefox OS though should lie in its ‘interoperability’ as it’s an HTML5-based platform

Further images can also be found at the original TechWeek source where they managed to get some time with an early build. The initial thought of the site’s Peter Judge was that Firefox OS contains everything you would expect from a smartphone OS, including support for calls, tests, calendar and contacts.”

We’d like to hear your thoughts on Firefox OS and the first screenshots showing it. Do you think more choice of operating systems is a good thing? Can you imagine that the Firefox OS could ever threaten the dominance of Android and iOS further down the line? Let us know with your comments. 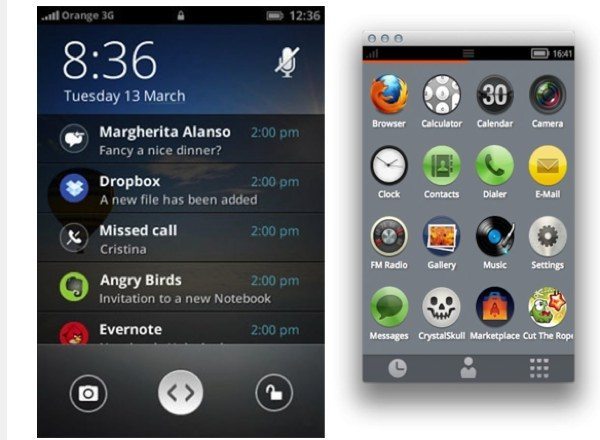 One thought on “Initial Firefox OS screenshots come to light”