The Holy month of Ramadan is an extremely important time for Muslims all over the world and although dates can vary by a day depending on where you are in the world it has now begun and will end around August 18. With that in mind we thought it would be useful to round up some smartphone apps for Android and iOS devices to help users at this time of fasting, self-examination and extra prayers.

The first app we have for your consideration is called Ramadan 2012 by Ioptime Android. It’s a free app and available from Google Play here for devices running Android 2.1 or later. It features the Hijri calendar according to Medina and a worldwide Iftar/Sehar Time Clock for Ramadam 2012 with seher and aftar schedule. It features a monthly view for Ramadan timings, supports different time calculation methods, has daily Salat timings and can switch between Hanfi and Shafi timings. Another feature is an alarm for salat timings.

The next app is a Ramadan 2012 Countdown app for Android by Georg Kiefer. It’s available from Google Play here and is another free app, this time compatible for devices running Android 1.6 or later. This is literally a countdown to the beginning of the Ramadan holiday by hours, minutes and seconds.

Another app is called Ramadan 2012 by Boukhatem.COM/Rechdi.COM and this is available for Android devices from Google Play here and also as an iOS app from iTunes here. The Android app is free and for devices running Android 2.2 or later and the iOS app is also free and for iPhone, iPod touch and iPad running iOS 4.3 or later. This app allows the user to check the current date of the month and see the 5 islamic prayer times, “imsak” and “iftar” across 251 countries of the world. It also features automatic prayer notifications with alarm options for before Iftar/Sehar and supplications and salutations (Hadith and Dua) to recite during Ramadan.

Hopefully these apps will help to enhance your experience of Ramadan and you may also want to recommend them to family or friends. If you have another apps regarding Ramadan 2012 to recommend then send us a comment so that we can share the details with other readers. 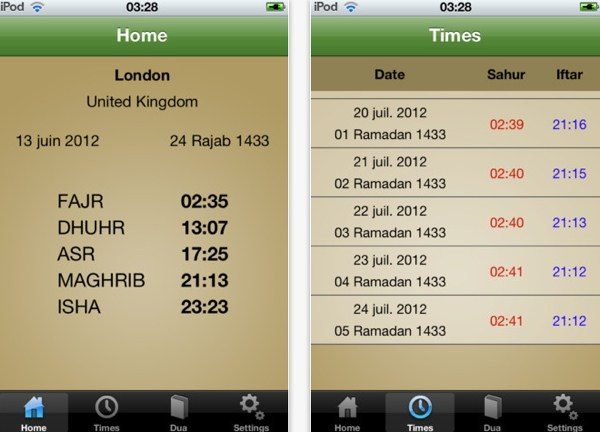