Rock Band for iOS app on its way out

When iOS users first grabbed the Rock Band app for iOS back in May, and fired it up they were greeted with a message stating the app would expire at the end of the month, but EA was quick to say the Rock Band message was an error. However, it now appears that although Rock Band didn’t end in May it is ending this month.

According to an article over on Ubergizmo, EA has officially announced that the Rock Band app for iOS devices will not be available to purchase as of the 31st of this month, along with downloads of purchased songs.

However, apparently Rock Band and all the songs will still be able to play locally.

The reason for removing Rock Band for iOS from availability is because EA’s licensing agreement with Harmonix is ending, and thus EA is discontinuing the Rock Band app for the iOS platform.

This news means of course if you happen to delete the Rock band app from your iPhone, iPod Touch or Apple iPad, you wont be able to get it back from iTunes, unless of course you have the app backed up to iCloud.

Rock Band for iOS is currently available to download from iTunes at a cost of $4.99, and does now carry a warning that the app will no longer be available from the App Store as of the 31st of July, so if you really want Rock Band, you’ll need to grab it soon and back it up to iCloud. 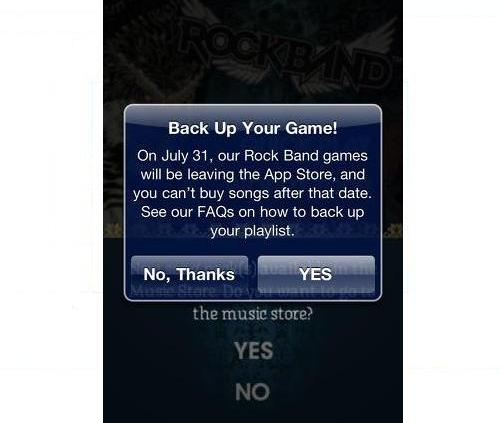