When it comes to Apple vs Samsung and vice versa we know that we will never be an Apple Apology or one from Samsung, this is getting very heated at the moment and both companies are right in the middle of counter attacks on each other.

We reported yesterday that Apple is seeking $2.5 billion and $30 per unit sold by Samsung, we do not know much more than this at the moment on this case, but what we do know is both sides do have their own say. Phandroid has both sides of the story and there are newly published court docs that are a very good read, in a way both Apple and Samsung are attacking each other and not holding back, this is most definitely the case of the two going on the defensive.

First up we will put together a few parts of the statement via Samsung; we have been developing and researching mobile telecommunications technology since 1991, and most smartphones you get today was invented by us. Apple would not have been able to sell the iPhone without Samsung’s patented technology, but then Apple have admitted in internal documents that they have not developed new technologies first but do successfully commercializing them. In 2006 Samsung had internal documents, which was well before the iPhone showing phones with large displays, rectangular phones with rounded corners, graphic interfaces with icons with grid layouts as well as flat front faces. The iPhone was announced in 2007 and Samsung according to the documents states that Samsung were already developing products that has the same design features that Apple believe were copied by the iPhone.

Apple as we know relies on Samsung’s technology, Samsung supplies main memory, flash memory and application processor for the iPhone, Apple claimed that Samsung‘s patents are unenforceable, do you agree?

Now moving on to the other side of the story, above is Samsung vs Apple and now it is time for Apple vs Samsung. Apple mentioned that there was evidence showing that Google put out a warning to Samsung, Google apparently warned Samsung that their Galaxy Tab and Galaxy S closely resembles the iPad and the iPhone, of course Samsung did nothing about this to change its designs.

Apple will be presenting in court a few Samsung documents, on these state that in February 2010 Google told Samsung that the P1 and P3 tablets aka Galaxy Tab and Galaxy Tab 10.1 were too similar to the iPad, in 2011 it was said that it is “regrettable” that the Galaxy S looks similar to the iPhone, and this was via Samsung’s own Product Design Group.

So you see that both Apple and Samsung are covering counter-striking attacks on each other, we will keep a close eye on this and keep you up-to-date on future goings on. Who do you believe are in the right? 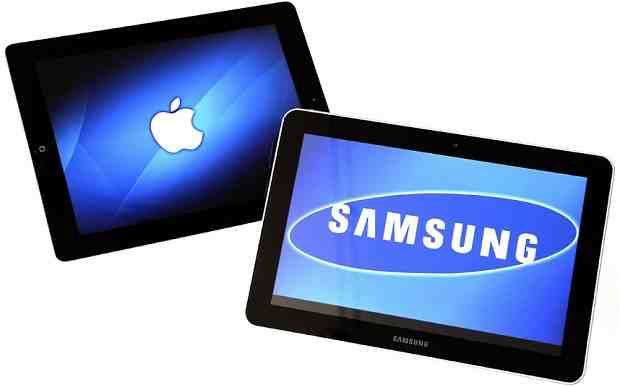 One thought on “Apple vs Samsung counter striking attacks”