The Google Nexus 7 tablet was finally released to the waiting public and has already proved a big success. It was the first device to launch using the new Android 4.1 Jelly Bean operating system and this, the decent specs and low price have combined to produce a real winner in the tablet market. Today we have some details for you about some interesting leaked official accessories including a Pogo dock and cases.

As the Nexus 7 is so reasonably priced many of us won’t mind spending a little extra on some accessories to help make the best of our tablet experience and if you’ve been wondering about the pogo pins on either side of the Nexus 7 we can now reveal what they’re for. A Pogo dock is on the way and is listed with a price tag of $49.99 and an August 24 release date. This accessory is sure to delight many Nexus 7 users and some of the blurb about the Nexus 7 dock says that it is “perfectly-angled for better movie and photo viewing, browsing and email.” The details also say that a 3.5mm jack plugs into active speakers and that you can also use a micro USB to charge it as it’s used.

The dock weighs 300g and was spotted in some leaked slides by Nordic Hardware and brought to our notice by Droid-Life. If you want a really beautiful cover for your Nexus 7 there’s also a premium leather case on the way set to arrive around a week later on August 31 priced at $39.99. This will be available in four different color options, which look to be red, orange, black and white from the leaked info although it’s difficult to be sure. It also looks as though the TPU case that is already available in a dark version will also be coming in more colors.

As this has come from leaked slides we cannot confirm these dates or even these products but the information certainly looks official and credible and we can’t wait to get a better look at the Nexus 7 dock when it releases. Are you a Nexus 7 owner and if so are you happy to hear about the leaked dock and premium case? Will you be splashing a bit more cash to enhance your Nexus 7 experience? Send your comments to let us know. 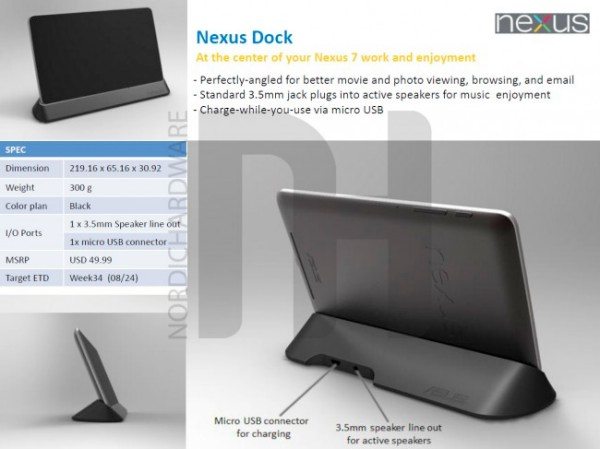