Bell releases the Motorola RAZR V for a low price

Fans of the Android platform on the various carriers around the world are spoilt for choice when it comes to purchasing a new smartphone, and today we have news for our Canadian readers as Bell Mobility releases the Motorola RAZR V for a low price.

Only last month we first told you that the handset was due for release in the country at the beginning of August, and as the Android Authority are reporting right on schedule the carrier has released the handset to its customers. This mid-range smartphone can now be had for $29.95 on condition of a new three year contract, and a minimum $50 voice and data plan, but if you want to own the handset outright without a contract it will cost you $399.95.

Compared to the original Motorola RAZR this version has a slightly chubbier form factor, but still only measures 8.35mm thick. The device also features on-screen buttons compared to the capacitive buttons found on the older version of the handset.

Other specifications of the Motorola RAZR V include a 4.3-inch ColourBoost qHD display, which is powered by a dual core processor clocked at 1.2GHz, 1GB of RAM, and 4GB of onboard storage that is expandable by up to 32GB via the microSD card slot.

Camera wise the handset features an eight megapixel rear shooter capable of HD video capture, while around the front is a VGA unit. The Motorola RAZR V comes running the Android Ice Cream Sandwich operating system, but currently there is no information whether it will be upgraded to Jelly Bean at some point.

It isn’t a problem if you are not a customer of Bell Mobility in the country though as all the major carriers will be stocking the handset soon, and the device is already available at Virgin Mobile’s website for the same $29.99 contract price. The off contract price on Virgin though comes in cheaper than Bell at $350. 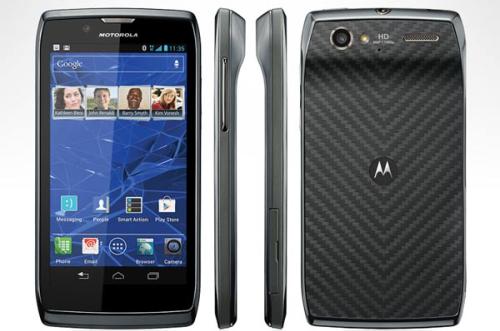