The battle between the two computer giants has transferred to mobile, with fans being just as passionate in their preferences as they were about their PCs and Macs.

Apple led the way with the production of the industry-changing iPhone, but the Windows phones from Microsoft are attracting more and more admirers with their latest handset ranges and mobile phone deals.

Look and feel
The straightforward iPhone button icon layout has influenced modern computer design. Practicality comes ahead of style; with everything you need laid out on the scroll-able home screen.

Windows does things differently – features are sorted by type into a menu that is initially strange if you’re used to the iPhone layout. You can pin popular apps, games or contacts to your home screen, this is especially useful for accessing the numbers you call most often.

One nice feature of the Windows phone’s layout is the option to choose from a range of colours, just with one click, to match your clothes, or your mood.

Apps: Information & Entertainment
It’s the apps that really make our mobile phones so essential and many people were disappointed when the Windows phone was originally released – compared to the iPhone, there were far fewer apps and in many cases they were poorly adapted. This has now changed as app developers have caught up with the Windows phone’s capabilities.

Saving data and connecting to other devices
Windows has its iStore / iCloud equivalent in Zune – for finding apps and storing data and there has been a lot of effort put into streamlining the ability to connect our mobile phones up to our laptops. In this regard, the iPhone maybe has the slight edge; it’s just so easy to swap documents and data from handset to desktop.

A feature of the Windows phone that you will either love or hate, depending on your feelings about Facebook, is the way contacts are saved. Your Facebook contacts and other people who you have saved in your phone are merged together.

These contacts feature instant status updates from the last time they were downloaded. Ultimately, it’s down to taste. Nitpicking over which phones have the biggest memory, best choice of apps or most attractive home screen is easy, but that’s because we take our mobile phones for granted.

If you could travel back in time to the mid-80s and tell someone carrying around one of those “new fangled” brick-like mobiles, what our phones would be capable of in 2012, they would never believe you.

What phone would you choose, the Microsoft Windows Phone or the Apple iPhone?

The article above was provided by a guest writer, please do let us know what you think. 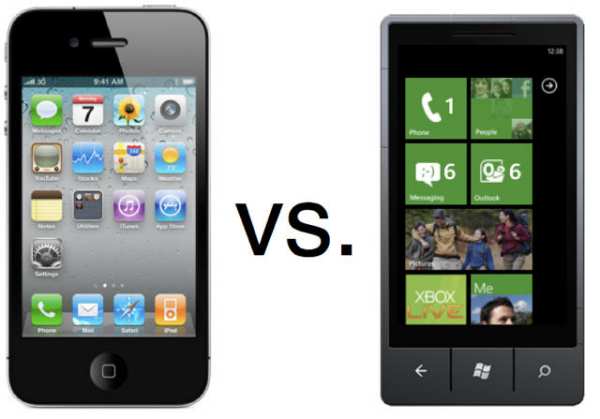 2 thoughts on “Apple vs Windows: Choosing the best mobile phone”