Naturally as the big day draws closer to when Apple delivers the device everyone of the iOS faithful are waiting for, more and more rumours of what the iPhone 5 will look like hit the net, and now we have word that the next iPhone could possibly be the slimmest iPhone so far.

According to an article over on MacRumors, it appears that Apple.pro has posted a scan from Chinese newspaper Apple Daily that managed to get hold of what is claimed to be one of the iPhone 5 enclosures, and has measured it, and claims that the enclosure measures just 7.6mm thick (image below).

There have been many rumours that Apple would slim down the iPhone 5 from the 9.3mm that the iPhone 4S measures, and if the report is correct it would mean Apple has managed to reduce thickness of the iOS device by 18 percent.

Apparently one manufacturer told the newspaper he was confident the leaked pictures are accurate, so much so that he was already gearing up to make cases for the 7.6mm thick iPhone 5, and itemized three differences between the iPhone 4S and the new iPhone.

Those three changes are…the iPhone 5 measures 123.83mm high, 58.47mm wide and 7.6mm thick with a 4-inch screen, the dock connector is much smaller, and a similar size to microUSB, and finally the earphone jack is now situated at the bottom of the handset.

Of course as with all things Apple, for now one must continue to take this will a large pinch of salt, but as it is generally expected that Apple will introduce the iPhone 5 on September the 12th, it isn’t all that long to wait to find out for sure. 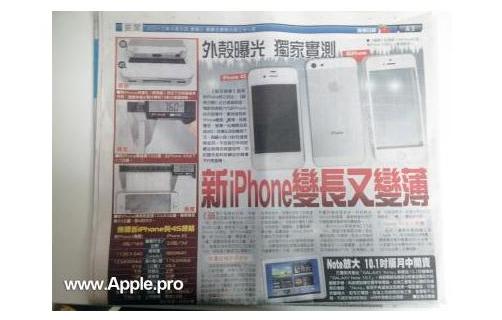