The latest slate from the Lenovo camp, the Lenovo ThinkPad 2 has been leaked quite a bit in the past, but now Lenovo has gone official with the new Windows 8 packing tablet, and announced the device will be heading to stores sometime in October, and will come with optional stylus input.

According to an article over on Slash Gear, Lenovo is to launch the ThinkPad 2 alongside the launch of Windows 8, and the new tablet will sport a 10.1-inch 1366 x 768 IPS LCD touch screen along with an Intel Atom processor, and packs a battery that is said to be good for up to 10-hours of use.

The Lenovo ThinkPad 2 also packs an 8 megapixel rear facing camera along with a 2 megapixel from facing camera, NFC, along with options of integrated 3G and 4G, optional fingerprint reader, optional stylus that utilises an active digitizer and slips into a slot on the slate, a ThinkPad style keyboard, three USB ports, wired Ethernet, and a desktop dock with HDMI-out, and runs Windows 8 of course.

There are also both HSPA+ and LTE variants, with Lenovo confirming AT&T will offer the device in the US, whilst the tablet is 9.8mm thick and weights in at 600 grams.

The only thing Lenovo didn’t let on about was just how much the ThinkPad 2 will command price wise, but as soon as we hear we will naturally pass that info along.

So what do our readers think about the Lenovo ThinkPad 2, is it the Windows 8 tablet for you, or do you have your sights set on another Windows tablet such as the Microsoft Surface? 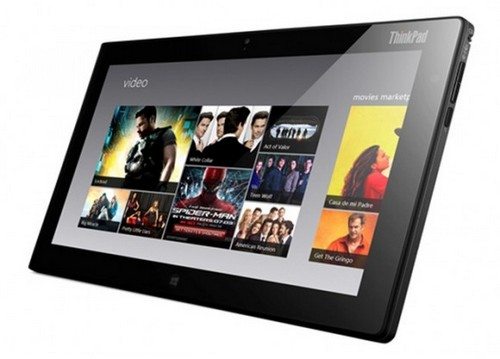