A while back the Samsung Galaxy S Duos S7562 smartphone surfaced in the mobile space albeit not via official channels, however old Sammy has now gone all official with the Android 4.0 smartphone, and now we can bring your the official specs of the handset that although looks like the Samsung Galaxy S3, actually has more in common with the original Galaxy S. 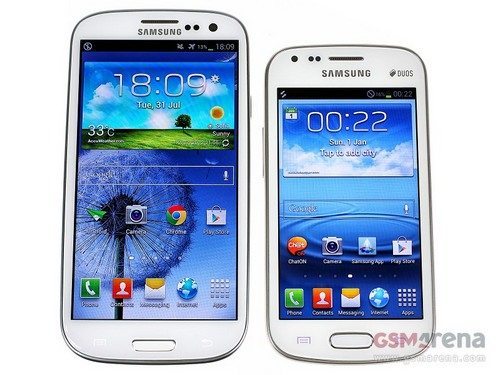 Size wise the Samsung Galaxy S Duos measures 121.5 x 63.1 x 10.5mm with a weight of 120 grams and sports a 1500mAh battery, and Samsung says that that dual SIM is ‘Dual SIM Always on’ meaning that if you happen to be in a call on one SIM, and receive a call on the other, the user can forward that other call to the active card, and you can apparently configure how incoming calls are handled on one card whilst using data on the other.

The word is that the Samsung Galaxy S Duos should become available in Europe sometime next month, however at the moment Samsung is keeping just how much that Android handset will cost to themselves, but of course as soon as we hear we will pass that info along.

Does the Samsung Galaxy S Duos look like the kind of smartphone any of our readers would like to own?