The tablet market has already become rather crowded with a number of different offerings from various companies to tempt consumers, but in the coming months this choice is set to grow even further with the launch of Windows 8. One device that is set to join the WP8 party is the upcoming Sony VAIO Duo 11 that is a convertible tablet PC.

An article over at Pocket Now is looking at some details that have come to light of a future Sony VAIO convertible tablet, and it is thought that the device will feature an eleven inch screen size because of the unit’s name. The device is a convertible tablet that will allow owners to have more than just a standard tablet, but at the time of writing the source responsible for the leak hasn’t revealed the full specs for the Sony tablet PC.

From looking at the various images that have been leaked for the device it seems it will run more than just Windows RT due to the fact that the Microsoft Office interface can be seen. The unique design will allow owners to turn the slate tablet into a keyboard laptop when required, and it will also have a stylus interface that will allow for handwriting in the same way that you can handle the Windows 8 UI with a finger.

It also seems that the keyboard is backlit judging by some additional images, and the keyboard is not some optional extra that can simply be detached. Some will like this idea but there will equally be others that don’t. Sony will be hoping the VAIO Duo 11 will fill a niche market and provide better sales that the company has experienced so far in the tablet market.

Obviously for the unit to prove successful pricing will be equally as important as hardware performance, and hopefully it won’t be long before we know more about Sony’s new tablet PC. Do you like the look of the Sony VAIO Duo 11? 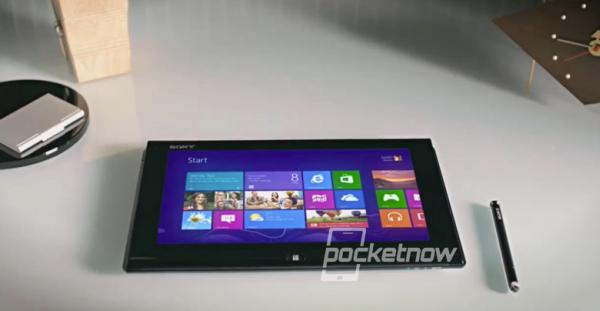