For those Android faithful that enjoy catching up with their favourite TV shows when on the go, and as long as you are in the United Kingdom, you might like to know that there is a new Android app available to download called TVCatchup, which enables the user to watch free live UK television wherever they are.

The TVCatchup app for Android devices features over fifty channels including BBC One, ITV, Channel 4, Five, 4Music, movies4men, Film4, Dave, Cbeebies and more, with high quality streams compatible with WiFi and cellular networks, what’s on now and next, TV Out support, and the ability to share via email and Twitter.

The TVCatchup Android app allows you to join over 7.3 million uses who already enjoy using TVCatchup, and enables the user to watch live UK TV on demand with a wide selection of freeview channels such as children’s TV, shopping, sport, music, movies, news and more and all channels are available in the United Kingdom. 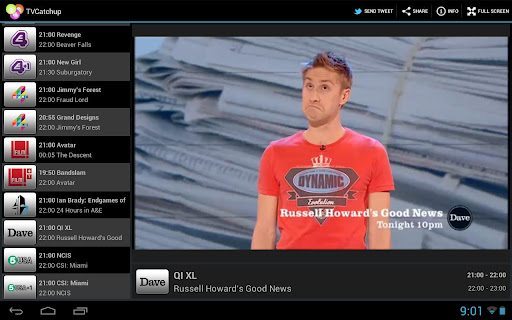 For those Android faithful that haven’t yet downloaded and taken advantage of what the TVCatchup app has to offer, you can download the app to your chosen Android device for free by hitting up Google Play.

Any of our UK Android readers already using the TVCatchup app?