Smartphone users in the United Kingdom have a bewildering amount of tariffs to choose from when signing up to a new two year contract. This becomes even more important when getting a new handset with many consumers paying for stuff they don’t even need or use, and today we have news of Vodafone Red UK releasing some new tariffs.

An exclusive report over on Best Mobile Contracts is revealing that UK carrier Vodafone are looking to have a major shakeup of their two year contracts, which will focus on their new project Vodafone Red.

These brand new tariffs will go live in two days time on the 7th of September and can been seen in the table that we have embedded below. The lower tariffs are pretty straightforward by offering unlimited SMS texts, and increasing amounts of talk time and mobile data. On the right hand side of the table is where the new tariffs can be seen, with the two new ‘Red’ contracts, which will both offer unlimited SMS texts and unlimited UK minutes.

Out of the two new Vodafone Red contracts that will be available the lower level will provide users with unlimited minutes and texts, along with 1GB of mobile data. The Vodafone Red Data contract will provide customers with the same amount of calls and texts, but provides an extra 1GB of data.

The carrier has designed the new contracts so that customers get their allowances doubled or more when going up to a higher contract. These new tariffs will provide competition with offerings from O2 and T-Mobile, such as The Full Monty Plan.

This new contracts will just be in time for the upcoming release of the iPhone 5 and the new Windows Phone 8 platform from Microsoft. Unfortunately there are no details regarding the pricing for these plans.

Are you a Vodafone customer? 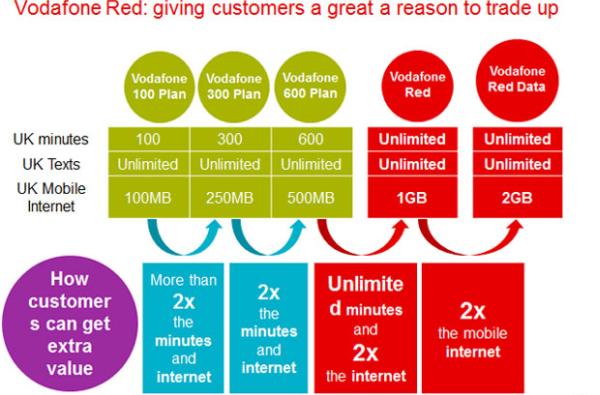