Opower, the energy information software company, has done an analysis of what it costs iPhone 5 users to charge their phones every day for one year. It turns out that it costs about $0.41 a year, or 3.5 kWh. In comparison, Samsung Galaxy S3 users will pay $0.53 per year (4.9 kWh), due to the Galaxy’s larger battery.

The cost seems negligible, but from an environmental perspective, the energy consumption of popular smartphones has an enormous impact: the 170 million iPhone 5s that analysts believe Apple will sell in the next 12 months will draw enough electricity to power all of the homes in Cedar Rapids, Iowa for one year.

And the energy requirements of operating smartphones go far beyond charging the battery. In particular, smartphones are driving a huge boom in Internet traffic: in 2011, monthly internet traffic stemming from the average smartphone tripled relative to 2010 levels (150 megabytes compared to 55 megabytes), and the current level is projected to grow 17-fold by 2016. Processing all of this data traffic potentially carries a heavy energy price tag of its own, in the form of data centers. 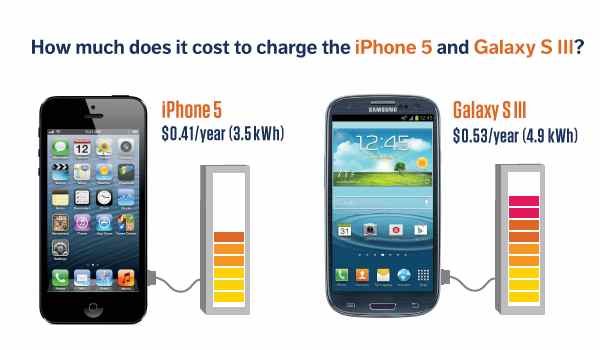 When all’s said and done, smartphones prevail as an energy-efficiency winner compared to traditional notebooks or desktops — when sending an email, watching a video, or sharing a family photo. Put simply, a day spent web-surfing and Facebooking on a smartphone or tablet is a much more energy-efficient day than doing the same on a traditional computer.

For a more in-depth look into the iPhone 5 Energy Impact Analysis we recommend you visiting Opower, this will give you abetter insight on how much it will cost you to charge your iPhone 5.