We always try to keep readers informed about the latest operating system updates for their various devices and today there’s some news for owners of the Google Nexus 7 tablet. A minor update to Jelly Bean is now rolling out for this device to give some performance improvements, bug fixes and stability to the Nexus 7 and if you are a Nexus 7 owner you should be receiving this update soon.

The 4.1.2 update was announced by Jean-Baptiste Quera, the technical lead of the Android Open Source Project (AOSP) and owners of the Google Nexus 7 tablet manufactured by Asus will be particularly pleased by one of the benefits. While the latest Jelly Bean update (30MG) brings relatively little, one highlight is that it will allow users of the 7-inch tablet to enjoy landscape mode now, a very welcome move.

News of the latest update came to us from BGR sourced from Google Groups and it appears that although some are now receiving the upgrade it is fairly slow-moving rolling out and plenty have yet to receive it. Gotta Be Mobile reports that they haven’t received the rollout of 4.1.2 just yet for their Nexus 7 devices and checking manually has had no results yet either. 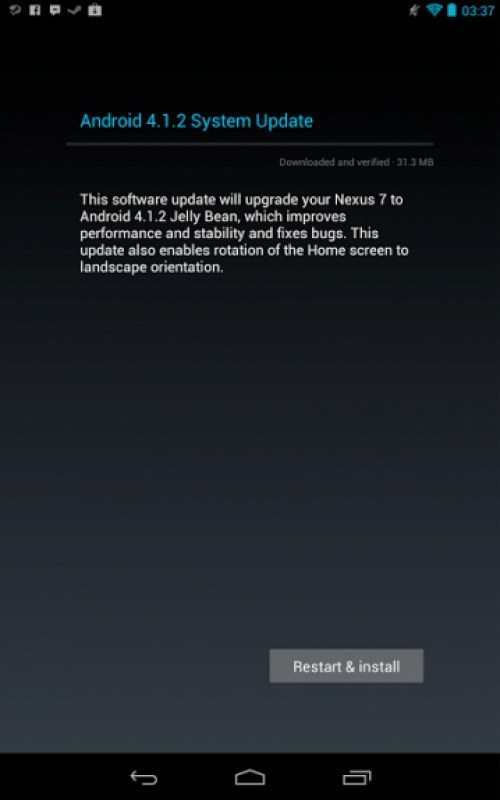 However it’s possible that it will pop up soon so if you want to keep trying then go to Settings>Apps>All and then find the Google Services Framework. Hit Force Stop followed by Clear Data, then return to Settings. If you then go to About and then System Update you may find news. If you have already rooted and unlocked your Nexus 7 there’s further good news because this update won’t break them, making upgrading straightforward.

We’re interested to hear from readers on this, especially if you are a Nexus 7 owner. Have you received the 4.1.2 Jelly Bean update already and if so, did the download and install go smoothly? Maybe you’re still waiting for the update for your Nexus 7? Send your comments to let us know.