We’ve been bringing you news from various leaks about the upcoming Google Nexus phone that for now we are referring to as the LG Nexus (LG-E960). Many Android enthusiasts prefer to use a Nexus device for a pure Google experience and there has been plenty of excitement about the new LG device, rumored for a November release. Today we have some further news on specs and some fresh clearer photos following new leaks.

Yesterday we gave details of image leaks that were rather grainy and burred but the new photos now released are very clear and will give readers a good idea what to expect. Also we have given some rumored specs but the latest leak adds some more and firms up some details. We’ll continue to refer to this handset for now as the LG Nexus although other names have also been mentioned. As you can see from the photos we’ve included in this post, the new pictures give us a much better idea of the look of the LG Nexus with the back plate in particular very closely resembling Sprint’s LG Optimus G. Meanwhile the front of the handset looks similar to the present Galaxy Nexus with some minor differences to the speaker grille and with a chrome-styled bezel.

These new photos came to our attention from Android Central, sourced from XDA Developers Forums, and other aspects such as the home screen and buttons all fit with a stock Nexus device. The source of the new images also gave further details on specs and firstly there’s a 1.5GHz ARMv7 quad-core processor, Adreno 320 graphics, 2GB of RAM, Android JellyBeanMR1, Kernel 3.4.0 and an 8-megapixel camera. 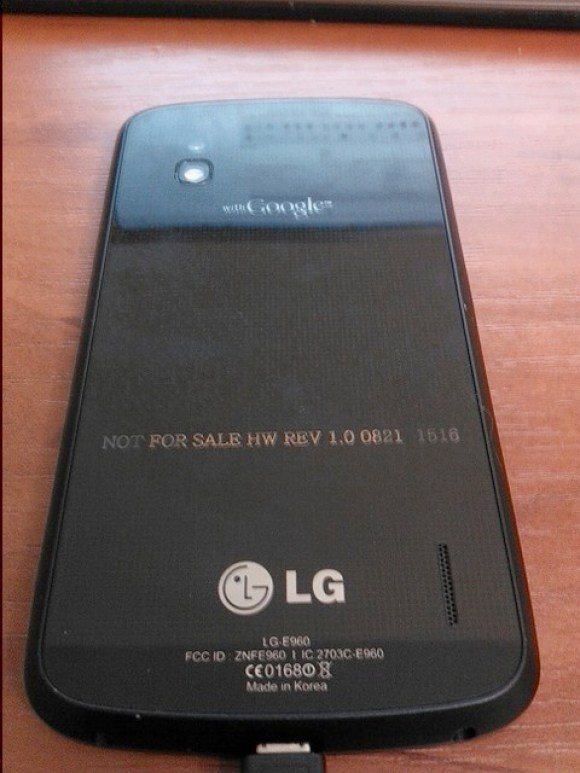 Previously we told how the LG Nexus was rumored to have a True HD IPS display with resolution of 1280 x 768 but where this latest info differs is that it states a resolution of 1184 x 768 with 320dpi. Although the vertical resolution of 1184 seems a little odd, some of the room is apparently taken by the on-screen buttons, hence the small difference. Also we had no news of the display size but Android Central informs that it should be around 4.7-inches, worked out from the resolution and dpi.

We had also previously heard that there would be 8 or 16GB of internal storage, which was already pretty disappointing considering there will be no microSD expansion. The latest news though is even worse as it appears the internal storage will be just 8GB and this will be a blow to many Android fans who will be looking forward to a new Nexus smartphone. Finally this latest source says that LTE won’t be supported and that only HSPA+ data access is available and this also fits with earlier news from FCC filings. This means that the LG Nexus would suit the HSPA+ networks of AT&T and T-Mobile.

We’ll remind you that as yet none of this is confirmed but we’ll certainly be keeping readers informed with further developments and news as we hear it. Are you waiting to hear more on the LG Nexus? If only 8GB of internal storage with no option to expand is confirmed, would it put you off this purchase? Let us know with your comments.