If you feel your life is at a loss without the aid of a personal robot, it appears that the humble smartphone is the device to offer you your robotic friend, as we have seen a few smartphone robots in the past. We came across a new smartphone robot project today that we thought might capture your interest, and that robot is called Romo.

Actually it’s the next generation Romo robot that is compatible with several iOS devices including of course the iPhone and iPad, although as Romo is a BYOD robot (bring your own device) you will of course need to supply your own Apple gear.

Romo currently can be docked with the iPhone 4, iPod Touch 4th gen and iPhone 4S, and can be driven by the iPhone 4, 4S, 3GS, iPod Touch 3rd gen and above, the new iPhone 5, iPad 2 and the new iPad, as well as any Mac running OS 10.6 or above, and web browsers Chrome, Safari, and Firefox. 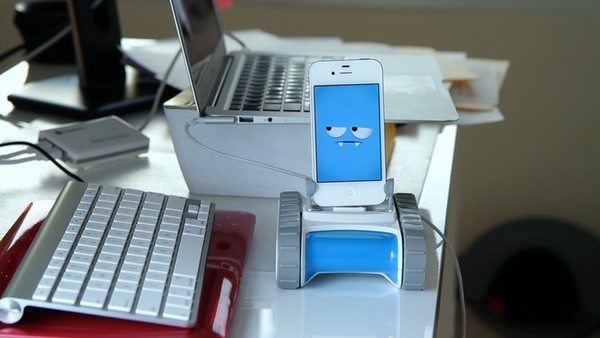 At the moment you can’t dock the iPhone 5 with Romo; however they are designing the next robot to use the Lightening connector as a docking station, whilst plans are in the works to design a Romo robot that works with Android devices.

Apparently Romo can be a pet, a toy, a robotic avatar, a powerful educational tool, along with being an advanced slate for robotic programming, he’s fun, cute, and easy to use, and is also an emotional robot, and with Romo the guys are trying to create the world’s first affordable personal robots.

Currently Romo is a Kickstarter project looking for a funding goal of $100,000 to get off the ground, and has thus far garnered $40,881 in pledges with 28 days to run, and will only be funded if the target figure has been pledged by the 15th of November.

To find out what Romo is all about we have embedded the promo video for your viewing consideration below, so don’t forget to hit that play button and check out the cute looking robot, and if you wish to make a pledge to the project you can do so by hitting up the Romo Kickstarter page.