The Apple iPad was once the main device in the tablet PC market but times have changed and other manufacturers are coming up with cheaper products along with some worthy ideas, such as the Asus Taichi Convertible Ultrabook come tablet that we have in video for you today.

As it is being reported by Connected Digital World the company has revealed its stylish Taichi device that combines a notebook with a tablet PC, which features a unique dual screen design that houses two 11.6-inch Full HD displays. When the lid is opened the device is used as a normal fully featured notebook device with a multi touch touchpad and SSD storage.

Once the lid is closed though you are left with a sleek Windows 8 running tablet PC with intuitive fingertip control, and the device can even display the same image on both screens, or different images on each, which can be shared by two people using different apps.

The two screens can be used simultaneously or independently and with the lid open vertically the device can share content to viewers on both sides from both screens at once. Under the hood is a powerful Intel Core i5 or i7 processor with 4GB of RAM, and an Intel HD 400 chip is installed to take care of the graphics. 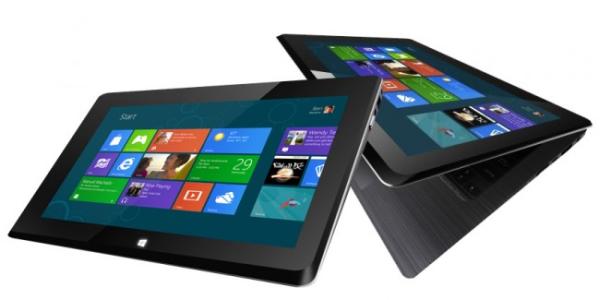 There is also 256GB of SSD storage, dual band Wi-Fi, Bluetooth 4.0, five megapixel autofocus camera with 1080p Full HD video capture, and a second 720p HD video camera as well. The device is pegged to be available in select regions from next month, but currently no pricing has been revealed.

Judging by the specs and the videos that can be seen below this looks to be a great product idea from Asus ticking a lot of boxes, surely a company like Apple could learn from this but design something even better. What do you think?