Last week Google revealed a new version of its mobile operating system along with some new hardware that included the new LG Nexus 4 handset. The new Android 4.2 Jelly Bean software that was also revealed will bring with it some new features to the operating system instead of being a complete overhaul, and now there are reports that last year’s handset, the Samsung Galaxy Nexus, has started getting the Android 4.2 update.

Android fans that have already pre-ordered the Nexus 4 or Nexus 10 should start receiving their new hardware now with Android 4.2 Jelly Bean already on board. Now according to the Android Police owners of last year’s Galaxy Nexus have taken to social networking sites such as Google+ and Twitter to report they are receiving the new software update.

According to the various reports it is only the GSM versions of the Samsung Galaxy Nexus that have been getting the update so far, so owners of the handset on Sprint or Verizon are probably still waiting for the update to land. 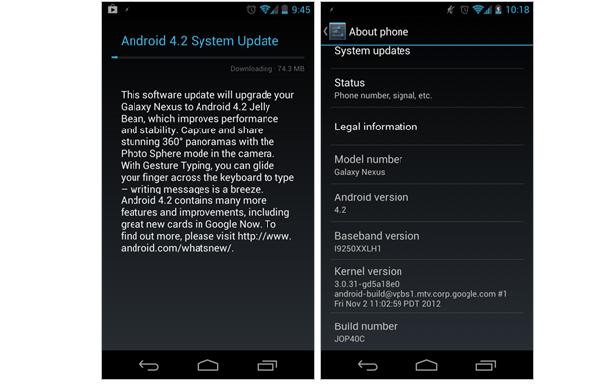 Owners of the Takju Galaxy Nexus smartphone can get the update manually by clicking here, but hopefully the new software will quickly spread to all owners of the handset shortly. The software update brings with it the new features that were announced recently such as Photosphere and Gesture Typing.

There have also been some improvements to Google Now and if you haven’t received the notification for the update yet you can always check the About Phone option that is found in Settings. Many Android fans prefer to own a Nexus branded smartphone as it normally means you are first in the queue for new versions of the mobile operating system, and you are treated to a vanilla Android experience.

Has your Samsung Galaxy Nexus received Android 4.2 Jelly Bean yet?