It’s no secret just how popular demand for the LG Nexus 4 has become, so much so that shipping has now been put back yet again, along with the fact that many unscrupulous people have been trying to earn a quick profit by ordering a load of these handsets up and then selling them on for a profit. As a result eBay has now set up a few restrictions, which means that the Nexus 4 now shares the same status as the iPad and the iPhone.

The online auction site has seen how the high demand for these latest LG Android handsets have resulted in people trying to sell far too many of these items, and while this will not allow you to get one of these Nexus 4’s before the Christmas period, it’s nice to know those that caused the shortage and made it tough for you to get your hands on one will not be able to profit either.

Below you will be able to see the limitations that eBay has set, and you don’t have to be a genius to work out why the device is so popular, but you have to wonder if Google has had a hand in this to cause such a hype in the first place — a lot like Nintendo did with the original Wii during the 2006 Christmas period and long after that as well. 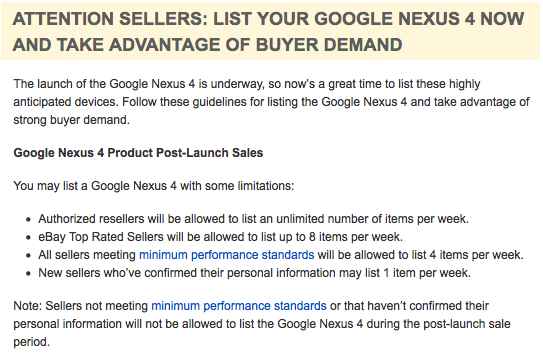 So you can see that authorized sellers still have no restrictions so are still allowed to sell as many of these Nexus 4 handsets as they like per week. Those top rated eBay sellers can only sell 8 per week, and those with a minimum level of performance can sell just half that amount each week. If you are new to eBay and have confirmed your personal details to the online auction site then you can only sell just one LG Nexus 4 per week.

However, if you do not confirm your personal information or have yet to meet the minimum performance set by eBay, then you will not be allowed to sell a Nexus 4 smartphone during the pre-launch period. It’s good to see someone finally standing up and trying to stop individuals trying to make a profit from those who just want one Nexus 4 to take home and enjoy.

We never thought we would ever see such limitations imposed on the Nexus 4, but it’s certainly nice to see a non-Apple device becoming so popular in a short amount of time. Don’t get us wrong, we love Apple, but this kind of competition is good for not only the industry but consumers as well. Having said that, it’s just annoying that there are those out there that try to benefit from this, although many of them have caused this shortage in the first place.