At Phones Review we try to keep readers informed about the latest operating system updates for their devices and although some manufacturers and carriers manage to push out updates fairly quickly, sadly that can’t be said for all. One case in point is the sad tale of the Samsung Galaxy Nexus on Verizon, still playing catch up with other Nexus devices when in fact one of the joys of owning a pure Android Nexus device is that it should always be one of the first to get the latest official OS updates.

This may be one reason why Google’s latest Nexus smartphone, the LG Nexus 4, is not tied to a carrier as the Galaxy Nexus on Verizon is rather a sorry tale and shows what can go wrong when updates have to go through a carrier approval process. The Galaxy Nexus was released on Verizon last November running Android 4.0 ICS and in June this year 4.1 Jelly Bean was announced. By July the HSPA+ Galaxy Nexus variant was receiving the 4.1 Jelly Bean update but it took a further two months for the LTE Galaxy Nexus Jelly Bean build to be approved by Verizon, even though other non-carrier Nexus devices received 4.1 Jelly Bean much earlier.

Since then there has been more of the same. Non-carrier Nexus devices have now received 4.1.2 and then the 4.2 update was also announced and rolled out before minor update 4.2.1 arrived. Meanwhile the Galaxy Nexus on Verizon remains firmly stuck on 4.1.1, three updates back, with no leaks of new builds. It seems as though Verizon is the stumbling block as Droid-Life helpfully outlines the update process. With non-carrier Nexus devices, Google only has two easy steps to complete, firstly to approve the software for the device and then to push out the update to that device. 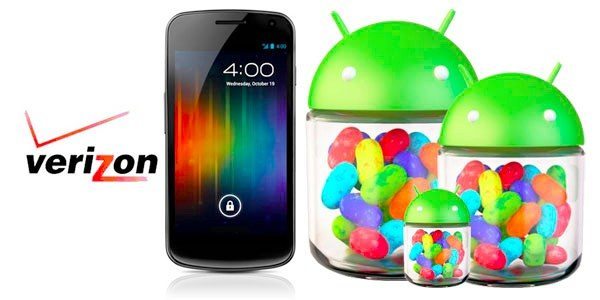 However the Galaxy Nexus on Verizon is a more complicated example of the update process. In this instance Google comes up with the update, which is then sent to Verizon for approval. As you can imagine, this may simply be added to a rather large pile of pending updates with the fact that it’s a Google Nexus device not gaining it any advantage in being speedily dealt with. At some point Verizon then approves the update and then Google can finally make it available for that device. In some cases Verizon may deny the update meaning the whole process starts all over again.

Thus the saga of OS update catch-ups for the Galaxy Nexus on Verizon goes on and we can understand the frustration that many Galaxy Nexus owners will be feeling, especially given the fact that it’s a Nexus device that you’d think would be above these complications. The lesson to be learned here is the valuable advantage of a non-carrier Nexus phone or tablet but that won’t help Verizon Galaxy Nexus owners right now.

We’d be really interested to hear your thoughts on the Galaxy Nexus on Verizon and how it trails behind other Nexus devices in receiving the latest OS updates? Are you one of those still waiting for Jelly Bean for your Galaxy Nexus? Let us have your comments on this.