University Students and their Mobile Lives

Here on Phonesreview.co.uk, readers know full well the extent to which mobile technology has become an inseparable part of our lives. Perhaps no other group feels the full weight of mobile phones’ influence, as have university students. For one, those attending university now are part of the generation who came of age just as mobile technology itself had come into its own. These “digital natives,” as they are sometimes called, have paved the way for the drastically increased use of mobile phones, particularly smart phones, in various ways.

Texting
Texting is likely by far the most frequent activity college students engage in with their mobile phones. A New York Times article reports that Nielsen found eighteen- to twenty-four-year-olds sends approximately 1,630 texts a month, which amounts to about 3 texts per hour. Another study cited in the Times article found that college students admit to frequently texting during class, a habit that professors found “shocking.” 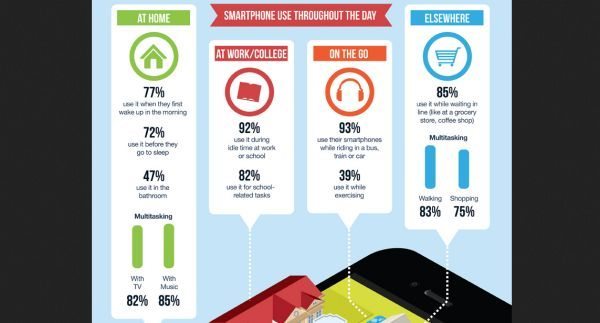 Studying
While some educators may lament the use of cell phones among college students, it’s not necessarily the case that students only use their phones to distract themselves or ward off boredom. A University of Colorado Boulder survey found that 45% of students “often” use their smartphones for school-related tasks, while only 4% of survey respondents said “never.” Indeed, mobile apps related to education have exploded in the past few years, and many students avail themselves of such apps to prepare for exams, complete homework assignments, and learn beyond the immediate subject matter being taught in their classes.

Media Consumption
If viewed from the right perspective, mobile phones for students can be seen as a window into the world at large. While you won’t find many college students reading print newspapers, students search for and read news on their smartphones constantly. According to the following infographic, an impressive 65% of students use their cellphones to read the news. 84% read breaking news stories, 76% read national news stories, and 65% use their phones to read international news.

Those who did not come of age during the digital and mobile technology revolution often decry smartphones, saying that technology is to blame for younger generations’ ignorance. However, considering how often and to what extent students use their phones to find out about what’s happening around the world and in their communities, we should embrace the mobile phone as a trailblazer in the proliferation of media.

Are you a student, or do you work closely with college students? What have been your experiences with mobile phones? Chime in below! Maria Rainier is a contributing writer for OnlineDegrees.org and we would like to say a big thank you for this article — Please take a look at the infographic below

Please include attribution to OnlineDegrees.org with this graphic.

One thought on “University Students and their Mobile Lives”