Although the iOS faithful would have you believe that Apple gear is the dominant tech gear around, we all know that over in the good old US of A it is Android that dominates over iOS, and that Samsung devices dominate over the iPhone. And this domination remains true in the three months ending November 2012, meaning that both Android and Samsung still dominate the United States.

The latest figures from comScore reveal that from August to November last year, Android retained the top slot when it comes to the top mobile platforms in the United States, with 53.7 percent, whilst iOS holds second place with 35.0 percent of the smartphone market.

When it comes to Research In Motion’s BlackBerry operating system it continued to slip down hitting just 7.3 percent from 8.3 percent in August. Microsoft’s Windows Phone operating system also fell from 3.6 percent down to 3.0 percent. 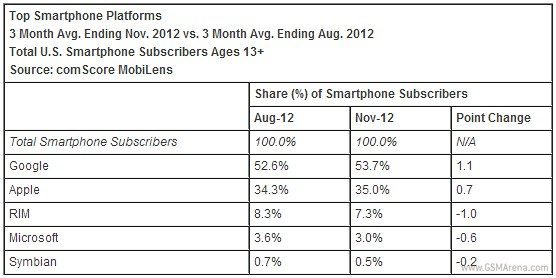 One does have to remember though that both figures where taken before the lucrative holiday buying season, so when the firm reveal their next figures in February thing could easily change, but for now anyway it appears that Sammy and Android continue to dominate the US.

If you are interested in mobile content usage, virtually everything one can do with a smartphone content wise went up, and comScore came up with these figures…

People sending text messages to another phone hit 75.9 percent in November up 0.3 point, handsets used to download apps hit 54.5 percent, whilst those that used their browser was up to 52.1 percent. Users that accessed a blog or social network reached 39.2 percent, those that played games was 33.7 percent, and finally people who listened to music on their handset was 38.7 percent.

So there you have it the market share figures for the US between August and November 2012, but to be honest it isn’t really surprising that Samsung and Android still have a comfortable lead over rivals is it, but like I said earlier, when the next figures come out it could change, and will be interesting to see just by how much.