One of the biggest criticisms levelled at the Android platform is the amount of different versions of the operating system that are in use, and the time it takes carriers and manufacturers to rollout the various updates. Some are guiltier than others for releasing new firmware updates, but today we have news of an O2 HTC One X Jelly Bean update as the percentage of devices running on the software grows.

The HTC One X Android Jelly Bean update first broke cover back in November but the rollout to all users has been a painfully slow one, with some UK users receiving the firmware update later in December. Now according to the Android Authority the update has begun arriving for users of the O2 network in the UK.

Back in December owners of HTC’s flagship smartphone on the carrier thought the update would be arriving on their handsets, only to be met with problems that caused the carrier to halt the release of the firmware. Now though everything seems to be ok again and the firmware update is arriving on customers handsets, and if you have yet to receive a notification for the software update you can manually check via Settings, About, and Software Update option. 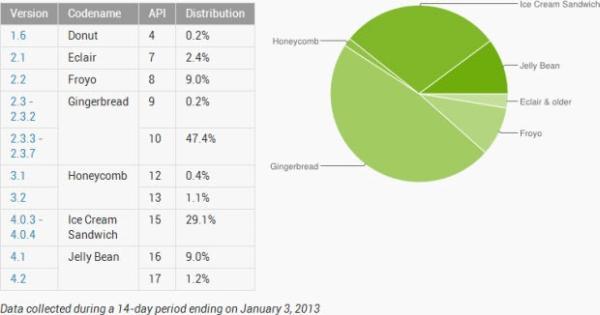 Only last month the HTC One S also started to receive the Jelly Bean software, which seems to be a growing trend for the platform as more hardware is being treated to the later firmware at last. According to Google Android Jelly Bean is now sitting on 10.2 percent of hardware on the platform, which comes from data collected during a fourteen day period ending on January 3rd, 2013.

This compares to a figure of only 6.7 percent during the same period the previous month, and back in October Jelly Bean was only being used on 2.7 percent of hardware running the Android platform. This news comes after we told you earlier that Android and Samsung are still dominating the smartphone market in the US beating Apple into second place.

HTC hasn’t got the best record with regards of updating its hardware to later versions of the Android operating system, as previously flagship smartphones are seemingly abandoned sticking with ageing versions of the OS. This can certainly be said about the HTC Desire HD that was originally promised to be treated to Ice Cream Sandwich only to be left on Gingerbread, which comes after many users rooted the device to run the software without any issues.

Android 2.3 Gingerbread is still the most widely used version of Android being used, and accounts for almost 48 percent but hasn’t seen any updates for over a year now. We are probably only a few months away now from seeing the next major update to Android that is being tipped to be called Key Lime Pie, which will further add to the confusion regarding Android updates.

Has your handset got Android Jelly Bean yet?