The mobile space isn’t just about smartphones and tablets as it would appear that the Bluetooth watch is becoming quite a big thing in the mobile arena, and with CES 2013 kicking off it appears that a couple of those Bluetooth watches will be shown off at the event. A while back we brought you news of a Kickstarter project called the Pebble watch for both iPhone and Android, which will be at the event, and also there will be a rival Bluetooth watch called Cookoo.

That Pebble E-Paper watch is compatible with the iPhone and Android handsets and can of course be customised via downloaded e-paper watch faces along with internet connected applications whilst connecting to your iOS or Android device over Bluetooth and alerts the user with a silent vibration when receiving an incoming call, message or email.

The Pebble watch has a 144 x 168 pixel display in black and white e-paper with four buttons, a vibrating motor, a 3 axis accelerometer and uses Bluetooth 2.1+EDR low energy tech whilst being compatible with the iPhone 3GS, 4, 4S and the iPhone 5 and any iPod Touch running iOS 5 or iOS 6 along with working with Android devices running Android 2.1 or above. 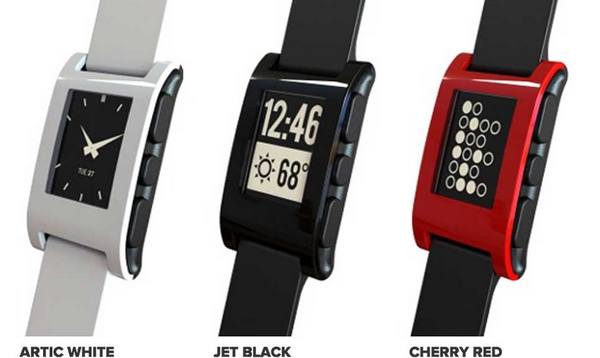 The Pebble watch commands a price tag of $150 and can be pre-ordered in either jet black, Arctic white, cherry red, orange or grey by visiting the Get Pebble website.

Then there is the Cookoo Bluetooth watch, which is also compatible with iOS and Android devices, and Cookoo was another Kickstarter project that Cookoo has now announced the global launch of the connected watch at CES 2013. 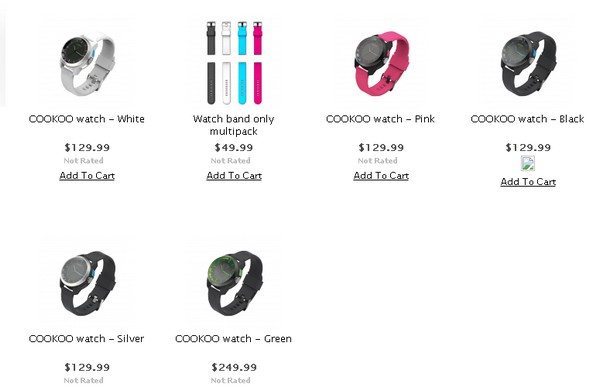 The device also incorporates a programmable dedicated button to tag and locate on a map, take a picture or check into Facebook or even locate your device, whilst a mode button can mute alerts and turns on or off vibrations. The Cookoo can also notify the user when their device battery is getting low or out of Bluetooth 4.0 range, and the supported notifications include incoming and missed calls, calendar reminders, Facebook messages and email messages.

The Cookoo watch in white, pink, blue and silver can be purchased from the Cookoo website at a cost of $129 although for some reason if you want a Cookoo in green it will set you back $249.99, whilst if you require an extra watch strap they are available at a cost of $49.99 a pop.

Any of our readers considering picking up a Bluetooth Smart Watch this year?

3 thoughts on “Cookoo to rival Pebble in Bluetooth Watch Practicality”