Over the last few years smartphones have become stylishly thin and lighter at the same time as the displays have got larger. This can sometimes cause issues if an owner of a certain smartphone accidently drops or bangs the device or get it wet, but today we have news of the Liquipel 2.0 coating that is unquestionably needed for the Apple iPhone 5.

Owners of various smartphones can easily purchase various cases that offer some great protection to their device, but this often comes at the cost of spoiling the stylish look of the handset. Engadget are reporting about a process that when applied can protect the iPhone 5 from liquid damage.

The process has been seen in the past but the team behind it has now revealed the new version of it at the CES 2013 event in Las Vegas, and basically waterproofs your handset inside and out. It was shown off on an example of the iPhone 5 that was submerged in water for thirty minutes, and the device when removed worked fine.

This new version of the waterproofing process is promised by the team to be up to one hundred times more effective than the original process, and the coating is said to last forever. This is because the coating becomes an actual part of the handset, instead of something that just sits on top of the surface that will eventually be wiped off. 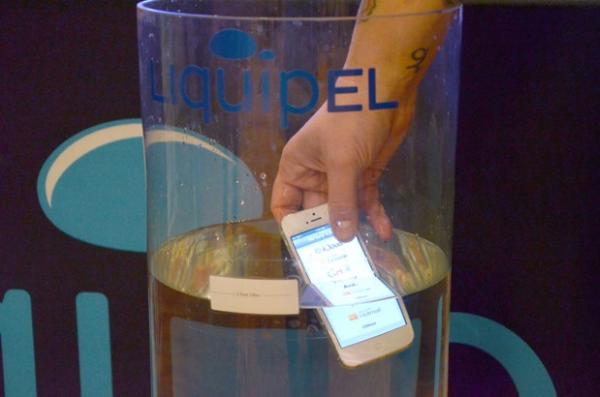 Managing Director, Sam Winkler, stated that any device that is treated to the Liquipel 2.0 process can get an IPX rating of at least seven, with an immersion depth of one meter for thirty minutes. The iPhone 5 that was treated to the water torture that can be seen in a video below did suffer eventually of too much water going in.

The device though quickly woke up after some of the water was shaken from it, and the company behind the process is now offering the service to shops that want to provide the treatment themselves.

This process is priced at $59 for a device the size of a smartphone, and the service is already available to customers via an online service in the US. It would make sense for various smartphone manufacturers to look into providing the treatment to their devices straight out of the box, which will help prevent any issues with smartphones getting even the slightest problems with moisture ingress.

Take a look at the video below and tell us what you think of the Liquipel 2.0 process.