If you happen to love remixing songs and sharing your remixes with your friends, and have an iOS device you might like the MusicTiles iOS app that features music from Peter Gabriel and other artists and allows you to remix the songs by way of using virtual modular tiles that can be easily used whether you are a composer, musician, or novice.

The MusicTiles app for the iPhone, iPod Touch and Apple iPad basically lets you shift around numerous elements of a tune so you can create your own mix of the song and then share your creation with others.

The iOS app features seven song versions including three Peter Gabriel song versions so you could if you wish make Red Rain more moody or soulful or make it edgier like Sledgehammer for example, an in theory one can create numerous unique remixes of a song. 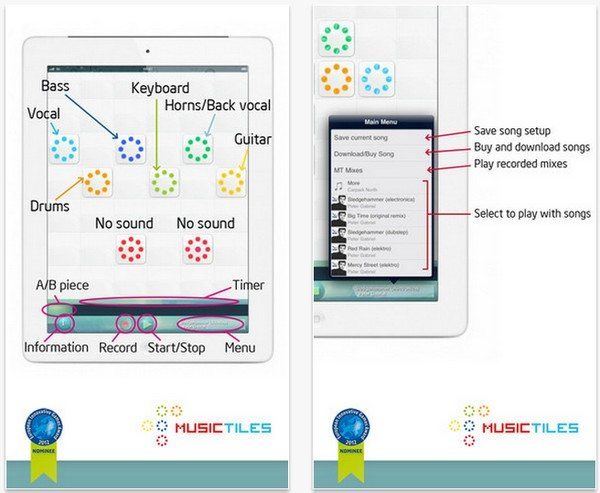 By using the app to play around with the tiles of a song the user can discover different sounds of tiles and go on to make their own remixes, which depend on how, when and where you connect and disconnect the coloured tiles.

Apparently red coloured tiles have no music so the user can use these as default tiles so you can produce a specific side of another tile and they make it easier to produce islands of tiles whilst is isn’t required for all tiles to be connected.

There is a menu whereby you can pick a song that you have downloaded and wish to play around with, and you can download new songs by hitting the Download Songs button and entering your Apple ID password for payment.

You can also record your remixes by hitting the record button that is next to the play button, after which you can replay your recorded remix from the menu MT Mixes, and you can email your recording to your friends or even share them on www.musictiles.com.

We have a couple of videos of MusicTiles in action for your viewing consideration below, and for those that would like to take advantage of what the MusicTiles app has to offer you can grab the app from iTunes at a cost of just Â£1.99.