While the ongoing CES 2013 event has provided us with some tasty new showcase mobile products so far, we have also been treated to a variety of different mobile technology accessories as well. So far these have mainly been from companies that are normally associated with such products, but we now have news of some Snooki Couture fashionable mobile accessories that adds some cuteness to devices.

Famous celebrities putting their name to a variety of different products is nothing new, as companies and the celebrities themselves look to cash in on their famous names. At the event taking place in Las Vegas Jersey Shore’s Nicole Polizzi has revealed the new line of audio accessories for mobile technology.

The new range titled Snooki Couture includes a set of headphones that clip into a headband with a bow, or there is a set of ear buds that have feathers dangling from them. There is also as you can see in the image below a landline phone that is plastered in red rhinestones or if red is not your colour there is a similar looking green version on the way, which instead plugs into your mobile phone. 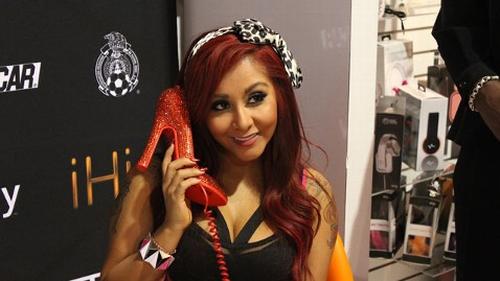 In the future according to abc News there is going to be some blinged up iPhone and iPad cases to tempt the fashion conscious amongst you, and the reality TV star especially likes the ear buds as it makes it look like users are actually wearing earrings.

There is already audio equipment from the likes of Dr.Dre with the Beats headphones, but according to Snooki this range offers more style. The range will be available later this year and are brought to the masses via a manufacturer called iHip, which are an audio accessory company. The range that will be on offer will be priced from $24.99 going up to $59.99. Check out the video below where the star talks about the new range.

Will you be considering any of these audio accessories?