At Phones Review we do our best to keep readers informed about the latest operating system updates for their devices and at the moment Android Jelly Bean is gradually rolling out to smartphones and tablets in various regions. There’s good news today then if you’re in the US and are the owner of the Samsung 10.1 Galaxy Tab 2 or the 7.0 version as the Android Jelly Bean 4.1.1 update is now on its way to your tablet.

The 4.1.1 Jelly Bean update has been rolling out since December to the 10.1-inch Galaxy Tab 2 in selected regions and is now available via Kies to users in the US. We have now heard that owners of the 7-inch Galaxy Tab 2 in the US are also reporting that the update is now available for their tablet, either through Kies or as an over-the-air (OTA) update. Although we expected the update around this time it’s always reassuring to see that devices are actually receiving it at last.

It’s a big update at 300MB, as you might expect as it will bring all of the much-awaited goodness of Jelly Bean to your device, such as, Google Now, Project Butter and a host of other changes, additions and improvements. If you’re in the US then and the owner of a Galaxy Tab 2 then check for the update by heading to Settings followed by About Device and then Software Update to kick off the update. The benefits of this update are notable so don’t miss out on Android Jelly Bean 4.1.1. 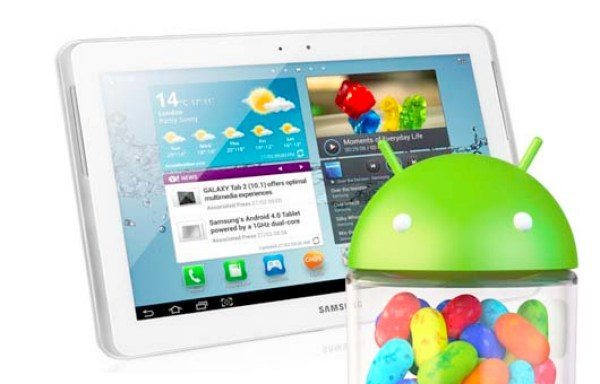 We can only hope that this is a good sign for those with the Galaxy Tab 2 in other countries who haven’t yet received the Jelly Bean update and of course we’ll bring further news as we hear it. Are you in the US and have you been waiting for Jelly Bean for your Galaxy Tab 2, either the 10-inch or 7-inch version? Maybe you’re one of the fortunate users who have just received the update and could let us know so that we know how the rollout is progressing? Tell us by sending your comments.