At the moment the biggest players in the smartphone market are Apple and Samsung with millions of consumers clambering to get hold of their handsets, but in the meantime BlackBerry maker RIM has had to watch its market share dwindle away. Things are looking up for the company though with the imminent launch of the BlackBerry 10 operating system, and in the lead up to the launch at the end of the month we have the BlackBerry Z10 vs the iPhone 5 in some video tests.

We have been hearing quite a bit about the BlackBerry Z10 recently leading up to the new operating systems show case at an event on January 30th, and now we have a comparison of the handset against the Apple iPhone 5 in a video that you can see below.

The design of the BlackBerry Z10 certainly seems to bring the platforms hardware up to the modern smartphone age, and the handset is slightly larger than the iPhone 5, and is heaver by about twelve grams. The rear of the smartphone features a removable back that provides access to the 1,800 mAh battery pack, as well as the microSD and micro SIM cards.

Obviously the handset being shown in the video is a pre-release version of the Z10, but the operating system was found to be smooth and fast running on the dual core processor under the hood. The handsets display comes in at 4.3-inches with a resolution of 1280 x 768 and 355ppi pixel density, while the iPhone 5 is 4-inches at 1136 x 640 resolution with 326ppi pixel density. 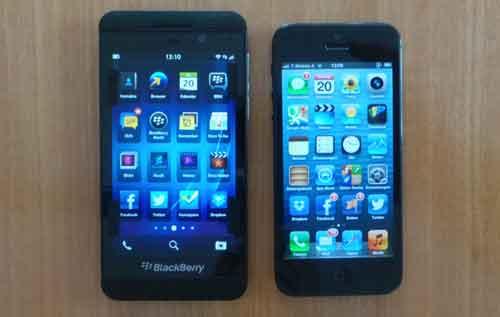 While the video can’t truly compare both handsets yet as the BlackBerry Z10 is not running the final build of the new operating system, but it does offer some valid comparisons. The video is in German though but you can see the two handsets side by side with both of them running their respective operating systems.

We are just over a week away now from finding out officially about RIM’s new offering to the smartphone world, and it will be interesting to see how consumers take to the new BlackBerry OS. Source: Telekom Presse via Google Translate.

Will you be considering the BlackBerry Z10?

2 thoughts on “BlackBerry Z10 vs iPhone 5 in video tests”