Apple Beats Samsung in US Smartphone Market Share with 34% 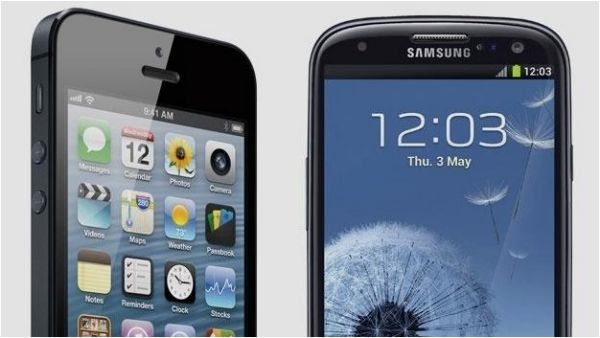 Apple is giving tough times to its rival Samsung with the strong sales volume of iPhone 5. According to the reports of Strategy Analytics, Apple has won over the US mobile market with its Smartphone during the last quarter of 2012.

The firm estimated that 52 million US consumers have purchased smartphones during the Q4 2012. Apple grabbed the 34% share out of the total sales. With 17.7 million iPhones sold in US during the said quarter, Apple remained at the top position. The company sold 12.8 million iPhones during the same period in 2011. Samsung occupied the second position with 16.8 million smartphones sold during Q4 2012; the sales were 13.5 million a year ago.

LG was at 3rd position with 4.7 million smartphones sold during the last quarter of last year among the US consumers. The company has faced a decline by 6.9% compared to the same time in 2011. From 13.7% market share, the company has to bear a drop in sales and acquired a new level of 9% market share. The overall mobile shipments in US has grown from 50.2 million (as in Q4 2011) to 52 million (as in Q4 2012), 4% annually. The reason behind this growth was the 4G smartphones launched by the manufacturers and the 3G-featured phones.

Although, Samsung was at 2nd position for the last quarter results, but the company has sold highest number of smartphones for the whole year with 53 million sales. Apple was at 43.7 million sales during 2012. 2012 was a tough year on Smartphone industry, as the shipments reduced from 186.8 million (as in 2011) to 166.9 million (as in 2012). The reason behind the increased sales of Apple products is the launch of iPhone 5 during the last quarter of the year 2012. iPhone 5, AppStore, the subsidies offered by the carriers, and exclusive marketing has given Apple an edge over other competitors.

Apple has snatched the lead from Samsung to rule the Smartphone market of US for the first time. It has been predicted that the companies would play some seesaw during the upcoming quarters of 2013. The new launches would also be made from both sides to grab the bigger market share of the consumers. Apple has reported its revenue for the last quarter of 2012 at $54.5 billion and the profit of $13.1 billion. Samsung has reported its revenue equals to $52.4 billion and the profit of $8.3 billion for Q4 2012.

The last quarter of 2012 seemed to bring challenging facts for both big rivals of the Smartphone industry. What would be the future? Would Apple come up with it’s unlock iPhone version or still consumers have to go for some unlocking software? Would Samsung introduce some different version of Galaxy or come up with bit modification? All these questions need some confirmed news from the resources of both companies. Up until now, there is fog of speculations. No one knows what’s there in the stock of Apple or Samsung to allure the customers. You are left with just one option and that is to wait, so keep waiting!

Author Bio: This post is written by Maria Sheher bano and she is currently working with “Webdesigncc” as a content writer.