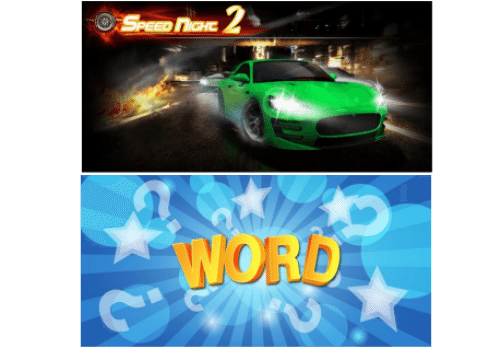 There are so many trending apps at the moment for Android device owners and one of these is none other than 4 Pics 1 Word, and today we want to show you two more apps that are rising in the charts over on Google Play.

The first app is called “Guess The Word 4 Pics 1 Word”, which is basically the same as the 4 Pics 1 Word puzzle game that is very popular indeed, this is just the same but an alternative. It works in the same way where four pictures will be shown and one word with blank boxes and you have to guess the word to find out what the pics have in common. This app is totally free and can be installed via Google Play.

The second app that is trending right now is “Speed Night 2” this is a fast paced racing game that follows the first generation of Speed Night. However, this new Android game release offers so much more such as more realistic physics engine. To control the cars all you need to do is tap the left and right of your smartphone or tablet and this will act as the steering wheel.

We have installed Speed Night 2 but only had about 2 minutes on it so far, so we cannot really give our verdict on it right now. Key features include features such as Magnet and this provides lessons within a certain range of gold used for a certain period of time, next up is Missile where gamers have to blow up the NPC the vehicle before you, there is also Time and Acceleration. For more information and the option to install please visit Google Play here.

Have you played Speed Night 2 or Guess The Word 4 Pics 1 Word yet? If you have please do let us know what you think of these two Android apps.