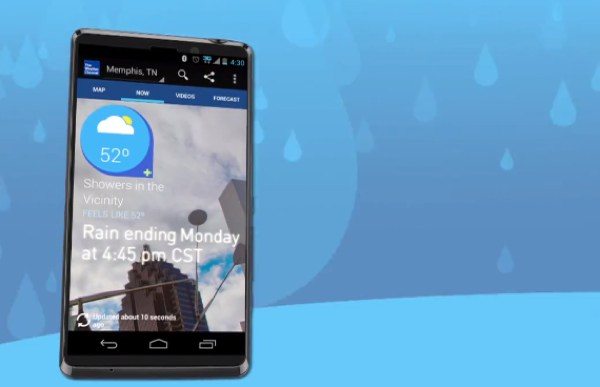 Many of you will already have heard of The Weather Channel app, one of the most popular apps of its kind. Today the Android version of the app was updated to version 4.0.1 giving it a completely fresh new look and many new enhancements. Although the list of improvements is long, the revamped version of the Weather Channel Android app seems to be drawing plenty of criticism among those people who were used to the previous version and we wonder if you could tell us your thoughts on the update.

Firstly we’ll tell you about the update to version 4.0.1 and this is a free app for devices running Android 2.2 or later. The Weather Channel app uses ultra-local TruPoint (sm) technology for its forecasts and help from more than 200 meteorologists and bills itself as the “most accurate weather forecast available.” Enhancements with the latest update include forecasts with more detail, improved selection of videos, faster maps and severe weather bulletins, being able to set up your favorite places for use of weather widgets and notifications and also a long-awaited Refresh button.

The Weather Channel app makes a pretty bold claim about its accuracy saying that if the weather where you are is going to change within the next 6 hours, the app will inform you the exact time and what will happen. It is now also optimized for Android tablets and the update also includes an overhauled user interface that looks notably different. You can see a video showing all about the update below this story.

This all sounds good then but as is so often the case when something is updated, plenty of existing users are unhappy with the changes. Under user reviews on the Google Play Store description of the app there are a significant amount of complaints about the way the updated app looks and performs although we should point out that some people are perfectly happy with it. There are a lot of unhappy users of the app though saying things like “update is terrible,” “much less usable,” “hate it,” “style over substance,” “update is horrible” and many more.

Some hate the new look while others are complaining about the intrusive ads. Also some users say it’s less functional and more difficult to navigate. If you want to read what people are saying or to download the app if you haven’t already go it, head to this Google Play page. We’d like to hear your thoughts on The Weather Channel app, especially if you are an existing user.

Maybe you can’t understand the fuss and think the updated app is better all round? Alternatively are you another of the many dissatisfied users of the app and wish it had been left well alone? Let us have your comments on the new look Weather Channel app for Android.