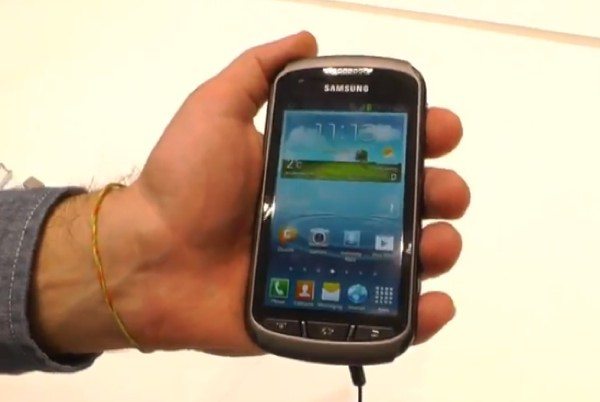 We’ve brought Phones Review readers news on the Samsung Galaxy Xcover 2 previously when it was first made official back in January. We’d been hoping to see more of the device and now at MWC 2013 this smartphone has been showing its rugged wares. Fortunately a few people have been lucky enough to get a hands-on look at the device so we are able to show you a video so that you can get a good idea of what it offers.

This is a ruggedized smartphone specifically targeted at the active, outdoors kind of person or maybe for those among us who are just plain clumsy. The Galaxy Xcover 2 has an as yet unspecified 1GHz dual-core processor, 4-inch display with resolution of 800 x 480, 1GB of RAM and 4GB of internal storage, expandable via microSD.

The Samsung Galaxy Xcover 2 also has a 1700 mAh battery and runs on Android 4.1.2 Jelly Bean but if you’re after a rugged device you’re probably more interested in its credentials in that aspect rather than expecting top-notch specs. The Xcover 2 is IP certified for dust and water-proofing, for up to 1 meter deep for up to 30 minutes.

So that you’re not likely too lose grip of your phone when active there are plenty of notches to stop it slipping from your grasp and it has a dimpled plastic reverse. As well as this all of the ports are suitably covered by protective specs. You can view the almost-two minute video below our story although it’s noted that the performance is rather sluggish. There’s still no official news yet though on release dates or pricing.

Take a look at the video showing the Galaxy Xcover 2 below and then we’d really like to have your comments on it. Does this rugged smartphone appeal to you? How much might you be willing to pay for it?