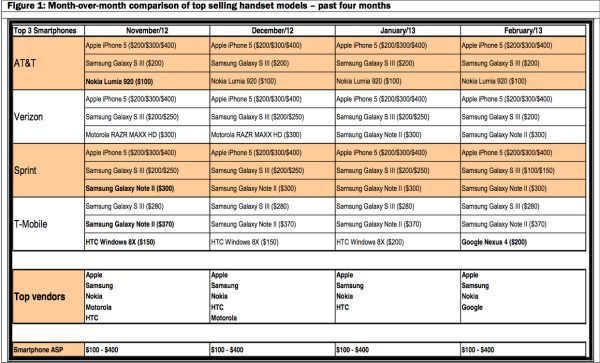 Being crowned the top selling Smartphones in the world last quarter, Apple’s (AAPL) iPhone 5 leads the Smartphones league, according to one of latest reports. Canaccord Genuity analyst T. Michael Walkley issued his monthly handset sales estimations for the month of February early Monday morning, and he found Apple’s iPhone 5 to be the best-selling Smartphone at each of the three major U.S. carriers in particular, where the phone is sold?

According to Walkley, the iPhone 5 sales outperformed Samsung’s (005930) Galaxy S III, the Nokia (NOK) Lumia 920 and AT&T’s Smartphone which surprisingly also brings the US’ leading Smartphone seller down to a no. 3 position after the iPhone 5 launch.

“Our February wireless store surveys indicated normal seasonal trends with softer Smartphone sales versus December quarter monthly sales rates. Despite a lowered sales volume in the February, Apple and Samsung maintained the dominant lead in the market shares. Consistent with the past several months, our surveys indicated an increasing mix of LTE Smartphones led by sales of the LTE iPhone 5 and the LTE versions of Samsung’s Galaxy SIII and Galaxy Note II Smartphones” Walkely expressed in one of his research notes.

There are many places you can buy the iPhone 5, how about getting the latest Apple iPhone 5 SIM Free today at PrePayMania.