Turn smartphones into a breathalyzer with Breathometer 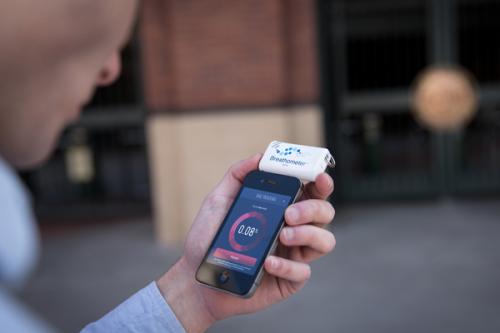 Many of us wouldn’t dream of knowingly driving while under the influence of alcohol, but we could still have too much alcohol in our blood streams many hours after we may have stopped drinking, but a gadget called Breathometer turns smartphones into a breathalyzer.

The device is claimed to be the world’s first smartphone breathalyzer and has been designed to blend easily into owners everyday life’s, and is nice and compact with a keychain fitted so you can have the device with you all the time.

Research has found that out of the people questioned 64% have been in a car or driven one themselves while under the influence of alcohol, and this little gadget has been designed to try and reduce this alarming figure.

It connects to an Android smartphone or the Apple iPhone via the audio jack and works with the accompanying smartphone application to provide the levels of alcohol in a user’s blood. It works on either the iPhone or iPod Touch running iOS 5 or later or Android hardware running Ice Cream Sandwich or above.

The product provides accurate BAC measurements and can even track your previous activity to help you allow enough time before getting behind the wheel. The project needs backing and has so far raised $1,210 out of a target of $25,000 with another 32 days to go at the time of writing.

For more information or to make a pledge yourself head over to indiegogo and check out the embedded video below.

Do you think the Breathometer is a clever idea?

One thought on “Turn smartphones into a breathalyzer with Breathometer”