HTC One video call via Everest Summit for Comic Relief 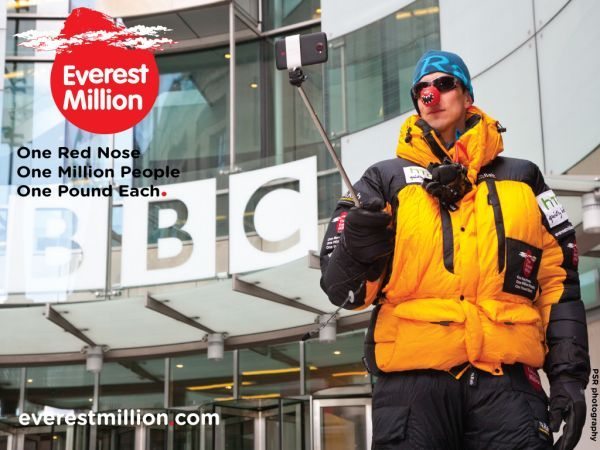 It is always good to do things for charity and this year HTC devices and British explorer Daniel Hughes will be doing something very special indeed, this year the HTC One video call via Everest Summit for Comic Relief will happen.

This will be the historic world first happening this spring, and it will all happen at an amazing 8,848m above sea level, Hughes will attempt to make the very first video call from the top of Mt. Everest. At the summit, Hughes plans to speak live to BBC News using his HTC smartphone and the latest mobile satellite technology from Inmarsat, in temperatures as low as -35Â°C. HTC is one of the lead sponsors for this remarkable expedition. During his climb, Hughes will also make scaling the world’s tallest mountain an interactive online experience, inviting his followers to share the journey through video, pictures and webchats.

Hughes, 32, aims to generate one million Â£1 donations for Comic Relief and place the first Red Nose at the top of Everest. He will begin his journey from base camp in mid-April and is expected to reach the summit via the South Col in mid-May. However, from the moment he sets off from London, his followers will be able to take part in his journey through an interactive online experience. Through webchats, photos, video and social media, followers can track his progress along the notoriously difficult journey, where he will be able to respond to questions, share insights and provide updates via www.everestmillion.com.

HTC is providing Hughes with a selection of cutting edge devices to assist and document his mission, including the powerful new HTC One, featuring an Ultrapixel camera and 1080p HD video, to capture the climb in detail. Utilising features such as HTC ZoeTM, long life battery and high-res photo capability of the phone, he will be able to capture every emotional step of his ascent. With on-mountain IP broadband access, followers will be able to share in the adventure, thanks to Broadband Global Area Network satellite technology provided by Inmarsat, the world’s leading provider of global mobile satellite communications.

The story behind the climb began with a 2010 trip to Bolivia, in which Hughes witnessed extreme poverty in the silver-mining region of PotosÃ­ and was inspired to take action to help others. Deciding to support Comic Relief because of their work with poor and vulnerable people across the world’s poorest countries as well as right here in the UK, Hughes decided to challenge himself to a feat never before attempted — putting a Red Nose at the top of Everest.

Talking about the challenge ahead, Hughes said: “The Everest Million campaign is all about people coming together to do something amazing for Comic Relief and the projects it supports. Climbing Everest is going to be exciting and at times scary, but thanks to the amazing technology from HTC and Inmarsat I can make this a fully interactive experience. You’ll be able to join me every step of the way, from live tracking and web-chats to answering your questions anywhere on the mountain.”

Hughes’ intense training for the trip has taken place over a number of months and has been documented in a series of YouTube videos. To date, preparation has included climbing the mighty Mt. McKinley in the USA, the coldest mountain on Earth, as well as Aconcagua, the highest mountain in the Western Hemisphere.

Phil Blair, HTC Head of UK & Ireland, added: “Daniel is taking on an incredibly dangerous challenge in order to raise money for others. We couldn’t be prouder of him, or more excited to be involved and offering our support. It’s been amazing watching his preparation for the trip and I’d urge people to check out some of the videos on You Tube. We’re also delighted to be working alongside Inmarsat to enable the public to follow his progress along the way.

“As you can imagine, this will be one of the toughest tests conceivable for our handsets. They will have to cope with below-freezing temperatures, changes in atmospheric pressure and more, however we’re sure they can and will step up to the challenge. We’ll be watching with baited breath as he reaches the summit!”

For more information, and to donate, please visit: www.everestmillion.com