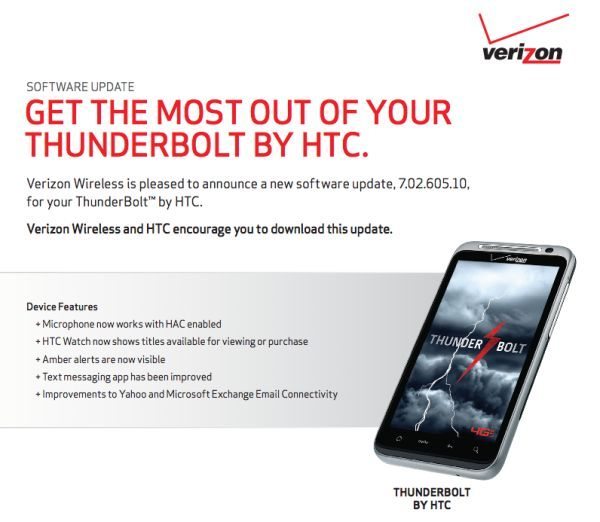 Can we sit here and say the HTC Thunderbolt is old news now knowing that it will never receive the Jelly Bean treatment? Well, for some this may not be the case because Verizon has just released new information that the HTC Thunderbolt has a new update arriving soon.

Even though Verizon will be releasing a new update, which can be seen over on its support page documents, we must stress the handset will never see an Android Jelly Bean update. Instead users will have to settle for a very small 19MB update.

The new update for the Thunderbolt contains features that will allow the microphone to work with HAC enabled, amber alerts will be visible, the text messaging app has been improved, as well as HTC Watch now shows titles available for viewing or purchase, there has been some improvements to Yahoo and Microsoft Exchange Email Connectivity as well.

Some may say that the HTC Thunderbolt is heading down a slippery slope, we have had a few emails from users saying they have given up this smartphone for other handsets simply because it will never have a Jelly Bean update. Most HTC devices now support Android JB and even new smartphones are being released with it pre-installed, the Thunderbolt is not good enough to handle such updates.

Whilst we sit and wait patiently, please let us know if you have had any HTC Thunderbolt problems, the more you can tell us about your device the better. Check out the Verizon HTC thunderbolt update via this PDF page.