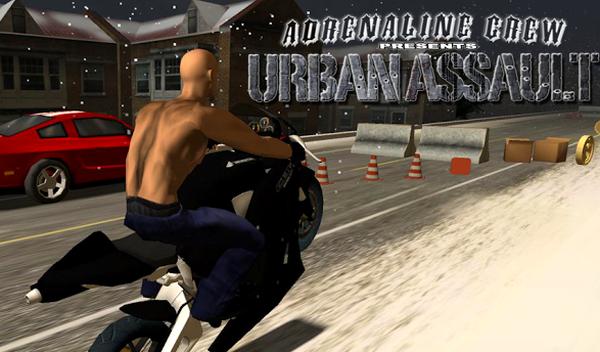 Quite often big franchises or other organisations can decide to bring out their own games, and today we have news of the popular Adrenaline Crew that has recently released a free game titled Urban Assault for Android and iOS users.

The Adrenaline Crew are better known for their breath taking motorcycle stunts and other reckless behaviour, but now they have released a free mobile game for the Android and iOS platforms that mirrors some of their behaviour.

It has an endless runner feel to the game in a similar way to the likes of Temple Run, but instead of running on foot you can take control of a variety of vehicles. The game comes from the same team that were responsible for the hugely successful Race Stunt Fight series, and the new title sees you racing down the street collecting those coins while shooting anything that gets in your way.

You get the chance to pick from a Cop Car, Mustang, Motorcycle, Hummer, or take to the street in your running shoes as you navigate through forty different levels with each of them having their own things to blow up.

Each vehicle has its own special weapon that includes the likes of a flamethrower and much more as you blow up such things as toxic barrels, chickens, and even police roadblocks. We have embedded the demo video below and to download the game head over to the App Store or Google Play.