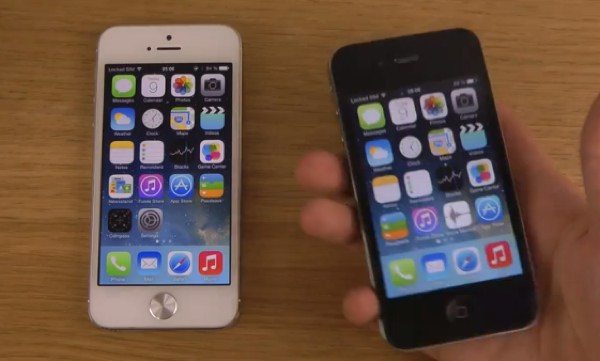 There’s a lot of interest right now in updated operating systems that are on the way for the Android and iOS platforms. Android 4.3 is currently being tested, and iOS 7 just reached the beta 3 stage and is due for a public release in fall. Today we have a collection of videos to share with you that show the iPhone 4 and 5 with iOS 7 beta 3 vs. the Galaxy S4 with Android 4.3.

We’ve posted many articles now about Android 4.3 Jelly Bean and iOS 7, so if you want to find out much more then please do check them out at the links. It’s all very well writing about the updates, but sometimes it’s easier to get a good idea of what they will offer by seeing them in action. Hence, the following videos show some comparisons that we think you will find interesting.

The first YouTube video that we have embedded below this story for you is a brief look at the Samsung Galaxy S4 on Android 4.3 vs. the iPhone 5 with iOS 7 beta 3, and concentrates on which is faster. It’s noticeable that the Android handset boots down quicker but of course iOS 7 is still in beta. The Galaxy S4 with Android 4.3 is also quicker at booting up, but why not view it for yourself to see the difference. 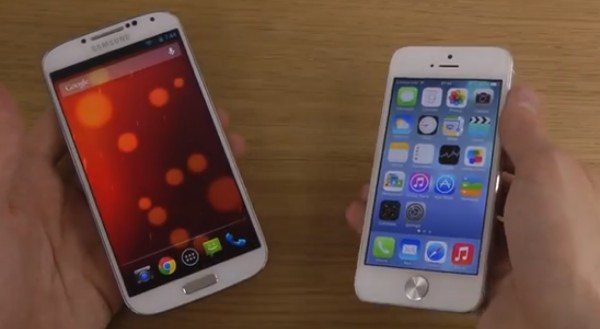 The second video we have for you is an 11-minute review of the Samsung Galaxy S4 with Android 4.3 vs. the iPhone 5 on iOS 7 beta 3. This gives a more comprehensive look at the two operating systems and takes a look at the various features offered and compares lock screens, widgets on Android 4.3 and the Control Center of iOS 7, and also some similarities that are evident. It also compares the App Store and Google Play Store and more.

The final video is also over 11-minutes and is a review of the iPhone 5 running iOS 7 beta 3 vs. the iPhone 4 with iOS 7 beta 3. It’s interesting to see the differences between the older iPhone on iOS 7 beta 3 with the current one using the same. It begins by detailing some of the enhancements with the latest beta, including some fixes, and shows the more transparent effect on the iPhone 5 to the iPhone 4. The video goes on to show the status bar, icons, and changes in some of the apps such as calendar and weather, and other aspects such as Siri.

It’s good to see iOS 7 beta on the iPhone 5 but it’s also a nice touch for owners of the older iPhone 4 to be able to get an idea of what they can expect. Alternatively, it’s also interesting to be able to see the Android 4.3 update on the Galaxy S4 compared to iOS 7. Why not check out the videos below and let us know what you think. Are you Android all the way, or is iOS your choice of operating system? Let us know with your comments.