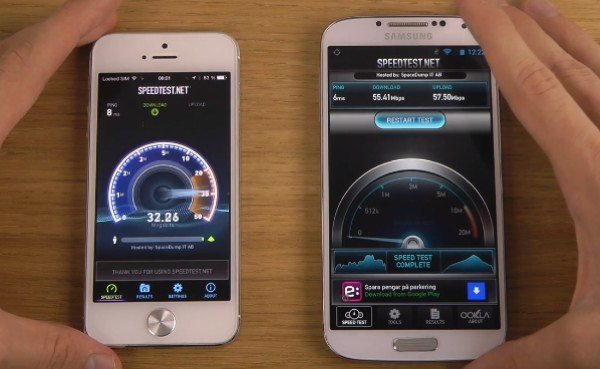 Apple’s iOS 7 is due to publicly release in fall, and we’ve been keeping readers informed about the various beta stages as they’ve become available to developers. Today we want to share a video that shows iPhone 5 iOS 7 beta 5 vs. Galaxy S4 Internet performance.

iOS 7 beta 5 went live on August 6 and there shouldn’t be many more beta stages left now until the Gold Master becomes available ahead of a release to the public. The 5-minute YouTube video that we have for your viewing consideration today, regards Internet speed testing of the iPhone 5 using iOS 7 beta 5 and the Samsung Galaxy S4 on Android.

It’s also pointed out that the testing itself actually runs quicker on the Galaxy S4 and overall the speed results are better on the S4. It’s a pretty impressive performance from the Android Galaxy S4 with the iPhone 5 on iOS 7 beta 5 lagging behind.

It will be interesting to see the same testing when the final build of iOS 7 reaches the public, but for now it seems there’s work to do. You can see the video below this story and check out the testing for yourself, and we’d appreciate your comments. Are you waiting for iOS 7 to reach consumers?