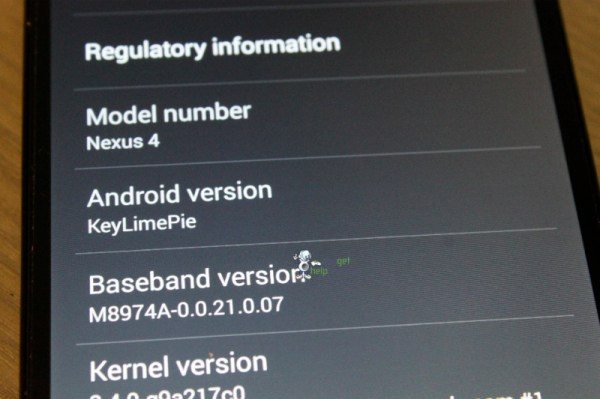 The Google Nexus 5 is still to be officially introduced but has been the subject of leaks and rumors for many months now. However, what if the device isn’t actually called the Nexus 5 after all? Recently an early build of Android 4.4 KitKat turned up on what was said to be a prototype Nexus 5, and this has led to suggestions that the upcoming device might actually be called the Nexus 4 2013.

However, we would point out that the new Nexus 7 could hardly have been called the Nexus 8 as the 7 refers to the screen size, and this has stayed the same. That alone then, is not enough to convince us that the upcoming Nexus phone will be called the Nexus 4, 2013.

There are other pointers though, but whether these sound credible is up to you. Now it has come to light that the purported Nexus 5 prototype that showed up is actually titled as the Nexus 4 in the settings. However, the device is clearly not the Nexus 4 that released last year as elements such as the display, keys and frame are all different.

Some have suggested that the mystery device may instead have been the Galaxy Nexus but the fact that the display is not completely dark suggests that it’s of the LCD variety rather than AMOLED. Also, other aspects of what was described as a prototype, such as the positions of the earpiece grill and front camera, tally with previous leaked images of the device dubbed the Nexus 5.

There are more indications too, as the baseband shown on the prototype is an earlier version than the Nexus 4 currently uses and LTE is enabled, but Google previously blocked this version. This build is also called “hammerhead” whereas the equivalent on the Nexus 4 is called “mako.”

Yet another sign is that the interface shows different gallery and camera apps than those on the Nexus 4, and the app drawer is 5×4 rather than 5×5. An Italian website (Google Translated) has put all of this information together and have now come up with the idea that the claimed prototype cannot simply be the original Nexus 4, and therefore will be the new Nexus phone with a Nexus 4 (2013) name instead of stepping up to 5.

The Nexus 4 moniker would then match with Android 4.4 KitKat that it’s expected to launch with, and the Nexus 5 next year would launch with Android 5.0. In summary, when you look at all of the indicators it could well be the case that the next Nexus phone might actually be called the Nexus 4 2013 and not the Nexus 5. It almost seems logical considering the above evidence.

However, we have to remember that all of this information is pure conjecture that derives from an early build of Android 4.4 KitKat on a claimed prototype device, so at this stage we have to say we’re sitting very firmly on the fence. We’d really like to hear your opinions though.

Do you feel that there’s a real possibility that the much referred to Nexus 5 might actually end up being called the Nexus 4 2013? Maybe you think that the above deductions are simply not based on anything solid enough to come up with this name theory? Let us know by sending your comments.