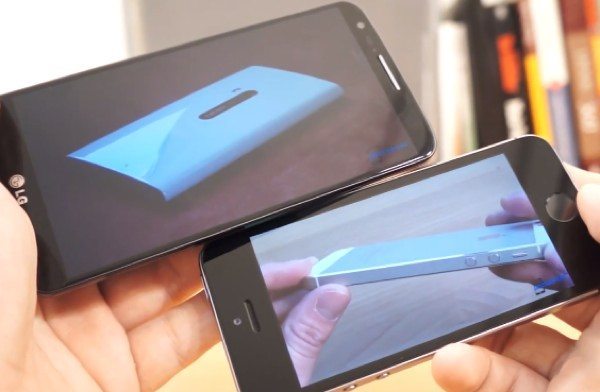 The LG G2 and iPhone 5S are both recently released smartphones that have received a lot of praise. If you’re about to buy a new smartphone you may be considering one of these, as despite their differences they both have some notable inclusions. Today we’re looking at the LG G2 vs. Apple iPhone 5S.

These handsets are both hitting regions worldwide and are definitely two of the top phones available right now. We’ve written plenty of articles on the LG G2 and iPhone 5S, and both have a great deal to offer potential buyers.

The LG G2 runs the Android operating system while the iPhone 5S runs iOS. If you’re definitely set on using the Android platform or iOS platform then your decision between these two may be already made. Similarly the LG G2 has a 5.2-inch display, much larger than the 4-inch screen of the iPhone 5S, so some may decide by the display size alone.

However, there will be some people who are open-minded about using either platform or screen size, and that’s where a comparison review comes in handy. The 10-minute YouTube video that you can see below this story offers a really good look at both devices, and it may help you make up your mind between the two.

The video begins with pointing out that the hardware is very different and shows the design of both handsets closely. It goes on to discuss the specs of each phone and then moves on to the operating systems.

You’ll get a look at the new iOS 7 featured on the iPhone 5S and it’s felt that many users will happily use this. While the LG G2 benefits from Android 4.2 Jelly Bean, there’s criticism for the custom skin, with the UI being described as not LG’s best work.

The reviewer says that he actually loves both devices on a day-to-day basis and both offer great performance. Battery life is said to be exceptional for the LG G2, giving it an edge in this respect and then the video goes on to look at the camera capabilities of both phones.

We won’t spoil the conclusion of the video for you, but suffice to say that these are described as “solid performers.” Check out the video below where you can see the full review. We’d like to hear your comments about the LG G2 vs. iPhone 5S.

If you are deciding between these two smartphones, has your choice been made by the display sizes or operating systems? Maybe there are other factors that have helped you make up your mind? Which device would you ultimately choose, the LG G2 or iPhone 5S?