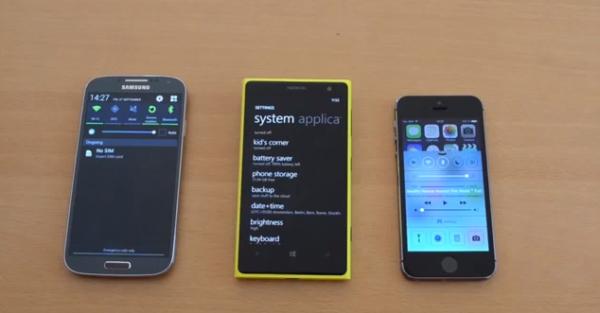 Smartphones have advanced a great deal in recent times with more powerful multiple core processors and larger Full HD displays, but this can sometimes come at the expense of needing to plug in the charger more frequently. Today we are looking at the iPhone 5S vs. Galaxy S4 vs. Lumia 1020 in some battery life tests.

Some users of various smartphones can experience poor battery life on their device even though manufacturers are trying to provide more energy efficient hardware and software. Below this article we have a video for your viewing pleasure that is comparing the battery life on the iPhone 5S, Samsung Galaxy S4, and Nokia Lumia 1020.

The video starts off by stating that all three handsets have the maximum brightness set on the display along with being connected to the Internet with Bluetooth on, but there isn’t any SIM cards inserted inside the handsets.

An HD video is then streamed from YouTube onto all three handsets while the battery specs for each device is listed, with the iPhone 5S having a 1560 mAh battery, Galaxy S4 at 2,600 mAh, and the Nokia Lumia 1020 has a 2,000 mAh battery.

The video that is streamed to the handsets is 1.5 hours long and after it has finished both the iPhone 5S and Galaxy S4 have 87% of battery left compared to the Nokia has only 83%. We then move onto playing the Temple Run game for 30 minutes, and this leaves the S4 with 79% of battery life left compared to the iPhone 5S at 75%, and again bringing up the rear is the Nokia on 63%.

The next test is using the rear cameras of the handsets for 45 minutes which left the Galaxy S4 on 60%, iPhone 5S on 37%, and the Lumia 1020 sitting on only 21%. We then move onto to music listening via Sound Cloud for an hour at full volume which left the Nokia at only 3%, while the iPhone 5S is down to 20%, which leaves the Galaxy S4 still on 52%.

These tests don’t show the Nokia Lumia 1020 in a good light especially when you consider the size and resolution of the Galaxy S4 display, and could easily put a few people off buying the device if they know in advance how poorly the battery performs.

Watch the full video and tell us what you think of these results.