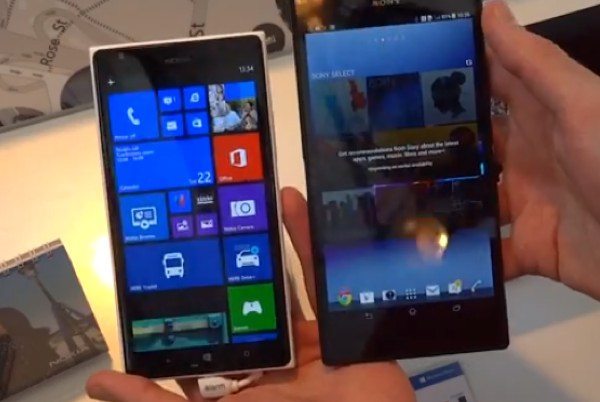 If you’re a fan of large-screened phablet devices and are thinking of adding a new smartphone to your holiday wish list then there are two phones making waves right now that you might want to consider. Today we’re looking at the Nokia Lumia 1520 vs. Sony Xperia Z Ultra, with specs to impress.

The Sony Xperia Z Ultra has a whopping 6.4-inch display and released a few months ago. The new Nokia phablet was officially unveiled yesterday and the Lumia 1520 release is set for sometime this quarter, in time for the lucrative holiday season. We’ll highlight the main specs for each device.

Processor
The Nokia Lumia 1520 is powered by a 2.2GHz Qualcomm Snapdragon 800 quad-core processor with Adreno 330 graphics and coincidentally the Xperia Z Ultra has exactly the same set-up.

Color Options
The Lumia 1520 will be available in black, white, red or yellow color options whereas the Xperia Z Ultra comes in black, white or purple.

As you can see from the above, both of these handsets have a very impressive array of specs, although we should point out that the Xperia Z Ultra is also dust and water-proof. There are more specs and an abundance of features for each that we cannot detail here, but both phones have a lot to offer.

If you have an open mind about using an Android or Windows Phone handset then this could be a tough decision, but aspects such as preference of design will also come into play. To help you out a bit more we’ve embedded a short video below that shows both handsets together and highlights some of the differences.